Around the Christmas holiday, the Rockets’ standout junior guard, Kalisa Williams, was lost for the season with an anterior cruciate ligament (ACL) injury. 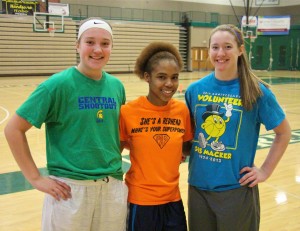 Instead of the Rockets slipping into a funk following the deflating news, they turned it into a rallying cry and continued their success.

With just three regular-season games remaining, the Rockets (14-3 overall) have produced one of the best girls basketball seasons in school history.

Barry, who is in his seventh season leading the program, said the last time Reeths-Puffer won a district championship was 2005. Currently, the Rockets have to be favorites to match that feat in next month’s postseason tournament, and also to clinch a league championship in the O-K Black Conference.

They hold a slim one-game lead over rival Mona Shores and Grand Rapids Union in the conference.

Reeths-Puffer has already beaten Mona Shores twice, by very close margins each time. The Rockets will close out their push for a league title by visiting Muskegon for a key matchup on Friday, hosting Zeeland East next Tuesday, then visiting Grand Rapids Union on Feb. 27.

Barry said there are a number of reasons for the Rockets’ current success, despite the loss of a big point producer.

“We have a lot of kids who are all about basketball,” he said. “They play basketball all season long through AYBT or AAU.

“And second, it boils down to chemistry,” he added. “A lot of them play on other sports teams together. It’s a unified group. There’s not a lot of personality conflicts. They’re constantly pushing each other to get better.”

Camaryia, despite standing only 5-5, is a ferocious rebounder, averaging nearly nine boards a game.

“She once had 17 rebounds in a game,” Barry said. “When it comes down to it, she doesn’t let anyone get in her way of getting a rebound.”

But the Rockets’ most pleasant surprise has been the emergence of Artrese Williams and several other sophomores, including post players Brooke Larabee and Delaney Bolles, a dual threat that makes the offense much more dangerous.

The sophomore sparkplug in the backcourt in 5-2 point guard Elysia Mattos, whom Barry calls a “zone buster” with her ball handling and drives to the hoop.

“When (Kalisa) when down, we knew we needed everyone to step up with the scoring,” said Camaryia Williams, the Rockets’ lone senior. “The sophomores have really done a great job. They’ve given us two good point guards and two good posts. They’ve combined to help us win a lot of games.”

For the winning to continue, Barry said the Rockets need to continue to do the things that have been working – receive contributions from different faces on any given night, and play lock down defense.

“Our defense is key,” Camaryia Williams said. “That’s helped us win our games, more than anything else.”

Barry realizes the success story isn’t compete for this year’s squad, but he’s proud of his program as it currently stands, as well as its future potential.

He likes the solid coaching at the JV and freshmen levels. Another plus will come in the offseason, when varsity assistant coach Amanda Parker – a former standout at Mona Shores and Western Michigan University – will coach several Rockets in the AAU circuit.

“There’s a lot of good things happening right now,” Barry said. “But we realize we have a tough road to get to where we want to be this year.”