He thought his 2013-14 squad might be a big winner, but that fell through when several seniors decided to skip their final year of competition. 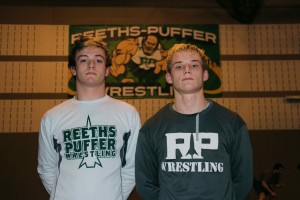 But that may have been a blessing in disguise, because it gave a group of younger wrestlers the chance to develop their skills. And this winter that group has put together an outstanding season.

The Rockets, champions of the O-K Black Conference and runners-up at the Greater Muskegon City Meet, are 25-4 in dual competition heading into Wednesday’s Division 2 district team tournament at Spring Lake.

“I knew we had some potential, but you never know until you do it,” said Brink, whose team was 5-0 in O-K Black duals and won the conference tournament last Saturday.

“We’re young this year, but this has been one of the best years we’ve ever had, maybe the best ever.”

The Rocket wrestlers certainly have an able teacher.

Brink, a 1997 graduate of Fruitport High School, was a three-time state champion wrestler in high school and a two-time All-American at the University of Michigan.

He’s been coaching at Reeths-Puffer for 13 years, four as an assistant and the last nine as head coach.

Unlike many prep wrestling coaches, who have holes in their lineups due to a lack of participation, Brink says he’s able to fill every weight class on most days, and expects to be able to field a full lineup in districts.

That’s particularly important in team wrestling, because a forfeit in a weight class does not earn the team any points. In a filled weight class, a wrestler can lose his match but still help his team by keeping the final score close or avoiding a pin.

“We’ve had a couple of things come up where we had a spot or two (in the lineup) open, but in most instances we’ve been able to bump kids around and fill those voids,” Brink said.

Two seniors who had big regular seasons – Connor McKinnon and Paul Douglas – will lead the way in the district tournament for Reeths-Puffer.

McKinnon, who wrestles at 145 pounds, has turned in a remarkable 40-1 record this winter. He was a state qualifier in the individual tournament last season.

McKinnon spent his first two years of high school in Florida before coming to Reeths-Puffer as a junior.

“He has a lot of experience, and has put a lot of time into the sport, and it definitely shows on the mat,” Brink said about McKinnon.

“He’s been in the program for four years, and was a regional qualifier as a sophomore,” Brink said. “He put in a lot of hard work in the offseason, and he has a lot of the characteristics you look for in a good wrestler, like a strong work ethic and mental toughness.”

Briggs actually weighs about 190 pounds, and has been wrestling much heavier kids despite only being a ninth-grader.

“We’ve actually wrestled him at heavyweight a bit,” Brink said about Briggs. “He’s going to be good.”

The Rockets will open the single-day district tournament Wednesday with a match against host Spring Lake at 6 p.m. Defending district champion Fruitport and Muskegon will wrestle in the other semifinal at the same time.

The championship match will follow, with the winning team advancing to regionals.

Brink is excited about his current lineup of wrestlers and what they may be able to accomplish in the state team tournament.

“I am (excited), but this year there are probably more expectations, and with expectations comes a little bit more pressure,” he said.