The Tigers used a 15-2 run to capture a 55-40 victory over the host Oakridge Eagles. 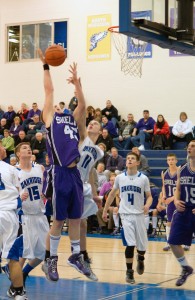 Danny Beckman was the difference down the stretch for Shelby by scoring all 11 of his points in the quarter.

“He was the difference between the first and second half,” said Oakridge coach Tracy Ruel of Beckman’s big fourth quarter. “But we didn’t shoot a single free throw in the second half and they took 18. We just settled for outside shots.”

Shelby was led by Jeffrey Beckman with 17 points and 17 rebounds while Caleb Anderson scored 10 points and Michael James had nine rebounds.

The Eagles were sparked by Hunter Benson, who drained three 3-pointers in the third quarter and finished with 15 points, eight rebounds and four steals.

“They are second in the state and our guys wanted to play well to hand them their first loss,” said Ruel. “They switched their defense up and went into a 1-3-1 press and that forced us to change our game and we just didn’t make our shots in the fourth.” 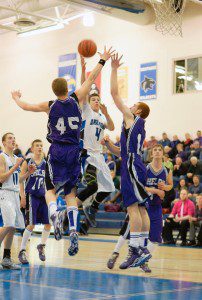 Hunter Benson gets up over Shelby’s Michael James and Jeffrey Beckman. Photo/Sherry Wahr