HOLTON – On Tuesday the Holton girls basketball team won its 14th game of the season, the most in the history of the program.

Much of this season’s success can be attributed to standout senior point guard Jacki Stone. The four-year varsity starter is the Red Devils’ spark plug, consistently getting things going on the offensive and defensive ends of the court. 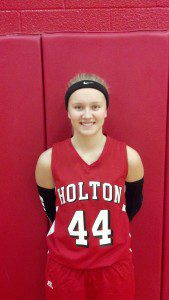 “(Stone) is no doubt our floor general and handles the ball a lot,” Holton coach Jayson Robins said. “She’s also involved in our full-court press a lot, where she plays the middle. Her skills and athleticism allow her to play that spot.”

Stone does it all for the Red Devils – whether it’s scoring, dishing off assists, grabbing rebounds or stealing the ball. She averages 10.8 points per game, five assists and six steals.

One of her typical well-rounded efforts came recently against Ravenna, when she collected 16 points, seven assists and six steals.

Occasionally she gets very hot, like she did against a strong Fruitport Calvary Christian team, scorching the nets for 26 points.

While Stone can score with some of the best players in the area, she says that dishing the ball off and creating offense for her teammates is much more rewarding.

“It’s my favorite part of the game,” Stone said. “It makes me feel good to get everyone else involved. If everyone on the team scores, you’re that much more of a threat.”

Robins said Stone has come a long way over her four years as a varsity starter. He said her development was less about her basketball abilities and more about the way she dealt with adversity.

“I think more than anything, it’s been her maturity level,” Robins said. “She was easily frustrated early in her career and didn’t respond well sometimes on the court. She expects a lot out of herself, but she’s been 100 times better with that this year.”

Holton. 14-5 overall and 4-5 in the Central State Activities Association Silver Division, has just one regular season game left before districts get underway next week. The Red Devils will face off against conference foe White Cloud in their final tune-up before March Madness.

Stone and the Red Devils are determined to make a run in the tournamenet after the most successful regular season in school history.

“It’s a great accomplishment,” Stone said of Holton’s 14-win season. “Since I’ve been here, there hasn’t been a lot of success. We just want to keep building on that to make our program successful.

“We still want to get things done in districts. We don’t want to fall.”

Robins is proud of the way Stone and her teammates have performed all season.

“It means a lot because we’ve been working toward this for a long time,” Robins said. “The girls have worked hard and this just shows that hard work pays off.”