The West Michigan Lake Hawks played a pair of home games over the weekend and came out with two important wins as they gear up for a playoff berth.

West Michigan topped the Motor City Firebirds 113-110 on Saturday and turned around and beat Team NetWork 115-96 on Sunday. 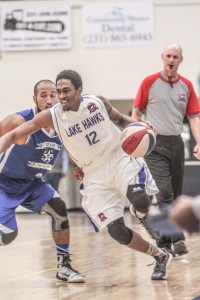 Idell Bell gets up the sideline for West Michigan. Photo/Joe Lane

Kulawnie Saunders scored a team-high 18 points and Will Wright added 17 points. Putting together a near triple-double was David Fox with 15 points, 10 rebounds and seven assists.

Coming off the bench for West Michigan was Lou Williams with 13 points and 13 rebounds, Jacob Owens with 12 points and Ralph Monday with nine points, nine rebounds and seven assists.

“We played a solid game tonight (Sunday) and had a lot of support from our reserve players,” said Lake Hawk coach Ronald Jenkins. “I enjoyed being able to play the reserve players and seeing them step up at this point of the season.” 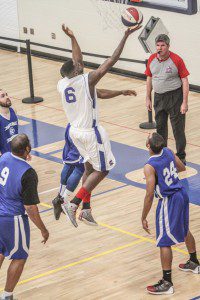 Saturday’s 113-110 win over the Firebirds was a near nail biter for West Michigan who led 60-53 at halftime but second half turnovers led to the tight contest.

A tough Motor City press caused many Lake Hawk turnovers and a pair of Firebird four-point plays in the final minute nearly cost the game for West Michigan.

The Lake Hawks were finally able to break the press in the final seconds to close out the contest.

“Starting off in the third quarter, we were slow getting to the ball and turned the ball over too many times,” said Jenkins. “It’s the unforced turnovers that were costly. Especially in the final minute of the game.” 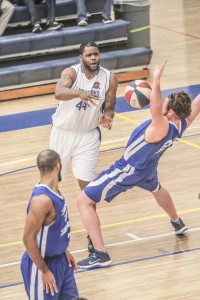 Melvin Lofton Jr. drives the lane and makes the pass for the Lake Hawks. Photo/Joe Lane

Monday put up a 11 points and 12 rebounds, Idell Bell scored 10 points and had five assists and Kulawnie Saunders chipped in 10 points for West Michigan.

The Lake Hawks continue home action next Saturday, February 21 at Reeths-Puffer High School when they face Cleveland at 6 p.m. 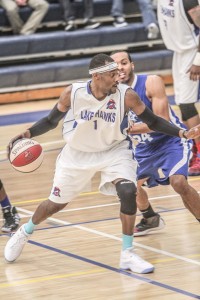 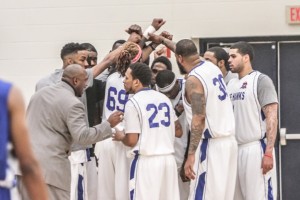 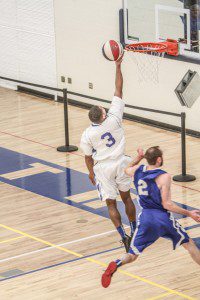