The Eagles had a bye in the first round of the tournament, then won the semifinals without taking the court when Kent City Algoma Christian forfeited the game. 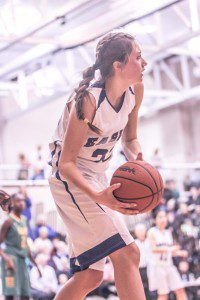 Taylor Richards comes down with a rebound for Fruitport Calvary Christian. Photo/Joe Lane

So the Eagles were more than ready to play Muskegon Catholic in the finals.

They opened the game with a 13-point run and never looked back, claiming a 65-48 victory over the Crusaders to claim the district championship.

“I’ve never heard of a team forfeiting a day before the game, and it hurt us, but having said that, the way we came out in the first quarter makes it hard to argue that it hurt us,” said Eagles Coach Brad Richards, whose team is now 19-3 on the season.

Senior standout Taylor Richards led the way for the Eagles with a game-high 29 points.

“This is a special night for us because we’ve had a long journey to get here, and it’s truly a family atmosphere here at Calvary,” Taylor Richards said. 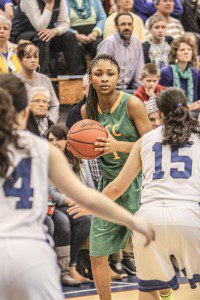 Taylor Richards led the first half Eagle uprising with 12 points while Allyson Richard and Hannah Roberts each had eight.

Calvary opened the third quarter with a 13-6 run. MCC called time out, then responded with a 10-3 run, but still trailed  52-37 at the third buzzer.

The Crusaders opened the fourth quarter with an 8-4 run in the first three minutes, but the effort wasn’t enough to get them back in the game.

Taylor Richards had 17 points in the second half for Calvary. 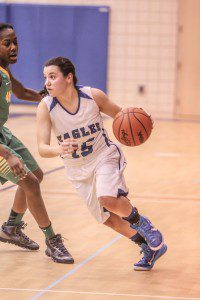 Hannah Roberts brings the ball up the side line for Fruitport Calvary Christian. Photo/Joe Lane