NORTON SHORES – Mona Shores sophomore Jordan Walker has been turning heads with her play all season, but apparently she saved her best for last.

After dropping 16 points against Grand Haven in the Class A district semifinal on Wednesday, Walker took over the championship game against rival Muskegon Friday, posting 36 points in a 57-38 victory. 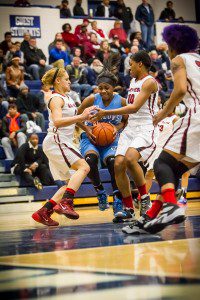 The Sailors, 20-3, now advance to the first round of regionals Tuesday against Forest Hills Centrfal at Kenowa Hills High School.

Walker, a sophomore guard, also had seven rebounds and four assists to go with her big point production.

“You see a kid who gave it all on the court,” said Mona Shores Coach Brad Kurth about Walker. “l’ve coached a lot of kids, but I’ve never coached a kid with this much heart. When her heart is determined to do something, and the game is on the line, she puts the team on her back and will do whatever it takes to win.”

After beating the Big Reds twice earlier in the season by a combined total of seven points, Kurth figured the district title game would bring a new set of challenges.

But the Sailors responded with an outstanding performance to capture the easy win and the trophy. 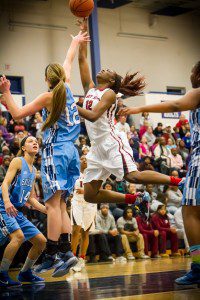 “We really didn’t feel that we played well either time against Muskegon, we felt like we had a lot more to give,” Kurth said. “We felt like we made a lot of mistakes that we thought we could correct.

“I think the girls proved that that’s true tonight. I couldn’t be more proud of these girls, every kid that hit the floor was just outstanding.”

The Sailors opened the game by hitting their first five shots and jumping to a quick 12-2 lead midway through the first quarter.

Mona Shores led 16-4 at the first buzzer and 29-17 at halftime. The Sailors shot 52 percent from the floor in the first half.

“They kind of hit us with a nice one-two punch in the beginning and we were kind of stunned. I give credit to them, They shot unbelievably well in the first half and we just never recovered.” 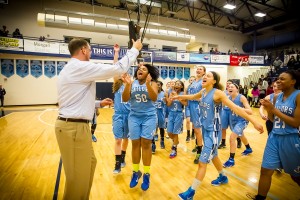 Muskegon struggled with its shooting in third quarter, allowing the Sailors to take control of the contest.

The Sailors scored the first 13 points of the half while the Big Reds missed their first 11 shots.

By the end of the game, Mona Shores had made 47 percent of its field goal attempts.

“As far as a 32 minute performance, this was the best we’ve played all season,” Kurth said.

Jena’a Matthews had six steals for the Sailors while senior Kelsey Wolffis had an all around good game with eight points, five blocks, four rebounds, four steals and three assists.