One of those seniors, Lamar Jordan III, had just made two free throws to pull Muskegon Catholic within one point of Spring Lake with seven seconds left on the clock. 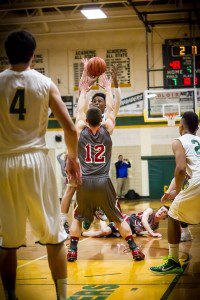 But Jordan’s third attempt bounced around the rim and missed the mark, creating a mad scramble for the rebound.

Martinez, a junior guard, came up with the ball at the top of the key with just enough time to get a shot away.

He tossed it up and banked it in as time expired, giving Muskegon Catholic a dramatic 50-49 victory and the Lakes 8 Conference boys basketball championship Thursday on the final night of the regular season.

The Crusaders, in their first season in the Lakes 8, finished 14-6 overall and 9-1 in the league.

“I looked around and saw the ball bobbling,” Martinez said about the final seconds and his heroic shot. “I saw it go off (teammate) Nate Jones’ hands and I ran in and grabbed it. I knew time was running out, so I shot high in case it missed.

“I couldn’t even see the shot, I was looking at the basket and then I fell to my knees and fell back. Then I heard yelling and I got tackled and that’s when I knew I made it. 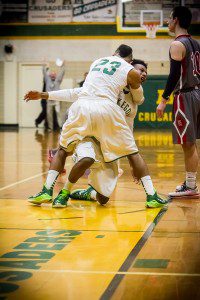 An MCC victory seemed highly unlikely in the final minutes of the game.

MCC’s Tommy Scott hit a crucial 3-pointer with 2:21 left to pull the Crusaders within three.

The Lakers went into an effective stall, cutting more than a minute from the clock. The Crusaders had to foul, but managed to stay alive when the Lakers missed a free throw on the front end of a one-and-one.

Muskegon Catholic got possession of the ball and missed three consecutive shots. There was a jump ball tie-up, and the Crusaders retained possession with about 10 seconds left. 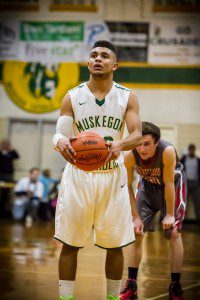 Lamar Jordan on the line for one of his three three throws with second remaining. Photo/Tim Reilly

MCC missed another shot, then Jordan was fouled from 3-point range with seven seconds left. That gave him the chance to tie the game, but only if he could make all three shots from the line.

Jordan made the first two, Spring Lake called a strategic time out to ice him, then he missed the third.

That’s when Martinez found the ball in the mad scramble and nailed the winning shot with several Lakers in his face, sending hundreds of MCC fans onto their home court in celebration.

“I told the kids to make sure they crashed hard (for the rebound) in case (Jordan) misses,” said MCC Coach Lamar Jordan. “We missed, we didn’t get a clean rebound, I was a little worried there, but then Christian battles for the ball, he gets off a lucky shot and we win the conference championship. 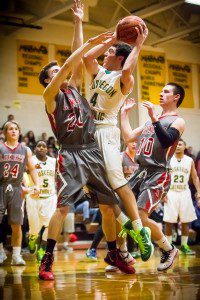 Dom Woodard drives the lane against the Laker’s No. 20 Joe Czajka and No. 10 Kyle Zietlow. photo/Tim Reilly

The game was a back-and-forth affair until the end, with both teams taking turns building leads, then watching them slip away.

The Lakers opened the fourth quarter with a 12-1 run to take a 49-43 lead with three minutes left. Keenan George, Zach Montgomery and Kyle Zietlow each scored four points during the Spring Lake uprising.

But lady luck bounced MCC’s way after that, and the title belonged to the Crusaders.

“They only had six points in the fourth quarter until that shot,” said Spring Lake Coach Bill Core, whose team had won the Lakes 8 title the previous two years. “They got eight points in the quarter and four of them in the last seven seconds.”

Core said he thought the final foul on Jordan may have come before the shot, and perhaps he shouldn’t have been given three free throws. 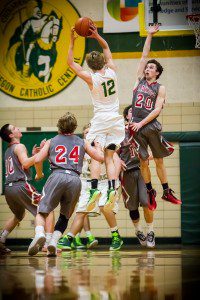 But Core also noted that his team might have left its chance for victory at the free throw line.

“We were 10-for-20 from the line,” he said. “If we would have made a few more of those, like our percentage all year, it may not have come down to that last shot.”

Spring Lake finished the regular season 13-7 overall and 8-2 in the conference.

Erik VanFossen led MCC in scoring with 12 points while Jordan added nine and Martinez had seven.

George paced the Lakers with 15 points, Zietlow added 13 and Montgomery had 12.