MUSKEGON – Maybe the Mona Shores Sailors got caught looking ahead to Wednesday – and the impending challenge of facing powerful Muskegon – during the early moments of their Class A district opener on Monday.

But after a sluggish first quarter in which they trailed underdog Reeths-Puffer, the Sailors’ woke up and claimed a comfortable 50-31 victory over the host Rockets. 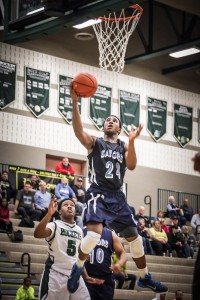 Kobe Burse goes up for two of his 20 points while Reeths-Puffer’s DeAngelo Williams trails. Photo/Joe Lane

“We got forced into playing their style early on,” said Mona Shores Coach Gene Gifford, whose team will play the Big Reds on Wednesday at 5:30 p.m. at Grand Haven High School. “We needed to speed up the game a little bit. And we went to the press. I thought that was a big difference. It was very effective tonight.”

Mona Shores, now 9-12, completed a three-game season sweep of the Rockets. Now they have to find a way to avoid a similar sweep by Muskegon, which is ranked second in the state and has only lost once this season.

“If we get a good shot every time down and play good possession defense, we should be all right,” said Mona Shores point guard Darece Roberson, who had 12 points, six rebounds and three assists on Monday.

The Sailors’ pressure defense forced Reeths-Puffer into numerous miscues and poor shooting in the second quarter. That allowed Mona Shores to get some easy buckets in transition, outscore the Rockets 19-5 in the second and take the lead for good.

But the Sailors’ performance was not perfect. They struggled with their shooting from the field and free throw line, where they missed their first 10 attempts.

“That may be a school record,” Gifford said with a chuckle. 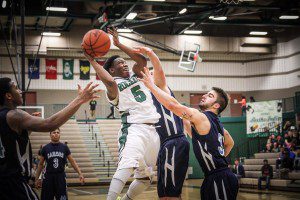 “We shoot free throws all the time in practice,” added Roberson, who hit 9 of 10 free throws in the second half to bolster his team’s percentage. “It’s still something we struggle with.”

After trailing 9-8 at the first buzzer, the Sailors sprung to life in the second quarter, thanks to junior wing Kobe Burse’s strong dribble drives and ability to finish at the rim. He led all scorers with 20 points, including eight in the second.

It was Burse’s steal and breakaway dunk near the end of the first quarter that lifted the Sailors out of their early funk.

“That got us going,” Roberson said.

Still, the Rockets hung around and only trailed 33-25 entering the fourth quarter, thanks to a pair of 3-pointers by southpaw senior Joey Olson in the third.

But Roberson’s steady free throw shooting, plus a key offensive rebound and putback by Burse, put the Sailors up 14 with under three minutes left. 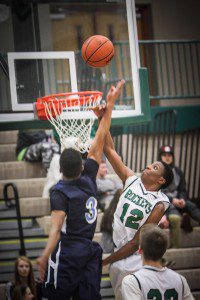 Gifford said there’s one huge factor that could help the Sailor in their bid to upset Muskegon on Wednesday.

“Taking care of the basketball,” he said. “That’s been our biggest problem. But there’s no doubt, Muskegon’s very good. (Deyonta) Davis is a big problem. (Joeviair) Kennedy is a problem. Their guards are playing very well. But their ability to score off of our turnovers has really hurt us (in previous meetings).”