But he hasn’t experienced that feeling quite enough.

Of course, he was a major contributor on last year’s Muskegon basketball team that plowed through the schedule and won a Class A state title with a 28-0 record. 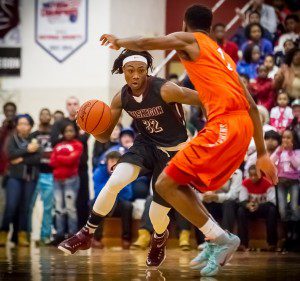 But he’s also suffered through three straight near misses in football. His Big Red football team made it to the state finals at Ford Field in 2012, 2013 and 2014, but fell short each time.

It’s his senior year, and he doesn’t want to exit without reaching the top again.

So Kennedy is extra determined to lead Muskegon to state glory a second time on the basketball court, starting with this week’s Class A district tournament.

The Big Reds open districts on Wednesday at 5:30 p.m. at Grand Haven High School, against the winner of Monday’s Mona Shores-Reeths-Puffer game.

“(The football finals loss) definitely made me more determined for the basketball season,” said Kennedy, a standout 6-3 forward, who reportedly got his nickname from his parents as a small child, due to his fondness for jumping off things. “This is my last chance. We didn’t get it in football, and I want to leave a legacy my senior year.”

Kennedy deserves to be a two-time state champ, if hard work and perseverance count for anything.

His prep season annually starts in early August with football preseason camp, and has extended through most of March, at or near the end of the state basketball tournament. As a freshman he played on a Muskegon Heights basketball team that made the state semifinals, and he’s been to the quarterfinals and finals with Muskegon.

That’s eight straight months of practices or games just about every day for nearly four years.

There hasn’t been much of a break between seasons. With his football team making the state finals for three straight years, he hits the basketball court immediately after hanging up the pads.

And summer brings no rest. Elite athletes go to football skill camps and play in summer basketball leagues, to sharpen their skills for the prep season.

It’s a wonder Kennedy has enough energy to compete for state titles, year after year.

“I just have to keep my body in shape, take a lot of ice baths, drink a lot of fluids and get enough rest,” said Kennedy, who passed the 1,000-point career scoring mark this season. “I usually take spring break to go out of town and just get away, but after that it’s back to work.”

“That’s what I like about two-sport athletes – in the summer they go from basketball to football and back again, and they don’t neglect either sport,” said Muskegon Coach Keith Guy. “There’s no secret to their success. They put the hard work in.”

He studied and played sports at Muskegon Heights as a freshman, despite growing up in the Muskegon district. 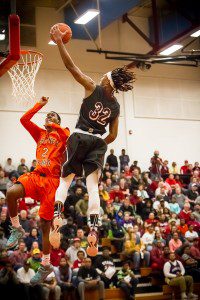 Kennedy goes in for a layup/Photo Tim Reilly.

But then financial problems caught up with the Muskegon Heights district. Suddenly it converted to a charter school, and there was no guarantee that there would be a sports program.

Meanwhile Guy, Kennedy’s varsity coach at Muskegon Heights, took the varsity job at Muskegon. That was enough to convince him to transfer.

He figured his football teams at Muskegon would be very good, because the Big Reds have a long history of success on the gridiron. But he had no idea he would be joining a basketball team that would make history.

Kennedy, who specializes in slashing to the bucket and has a nice outside shot, was the sixth man for the Big Reds his sophomore season.

He moved into the starting lineup as a junior and helped Muskegon record its perfect season, despite playing in the shadow of Mr. Basketball Deshaun Thrower and 6-9 All-Stater Deyonta Davis.

Kennedy averaged 12.3 points per game and scored in double figures in seven of the eight tournament games. He had a huge night in the state quarterfinals against Ann Arbor Skyline, pumping in 25 points.

“We just figured it would probably be the same thing, maybe make it to the semis,” he said about the last year’s team. “We didn’t really think we were going to win it. But then we started playing in the summer, beat a lot of good teams, and we started to realize it could be a great season.

“It was pretty amazing. We were winning every game and at the same time shocking ourselves. It was an incredible ride. I can’t even explain it. It felt really good.”

One more tournament to play

Of course Kennedy knows last season’s success doesn’t guarantee anything this year. The Big Reds are a different team without Thrower and two other starters who graduated last spring.

But they have been nearly as good so far. Muskegon, ranked second in the state in Class A, is 19-1 heading into the tournament.

Kennedy is a big reason for the continued success, averaging 16.2 points, 5.6 rebounds and 3.9 assists per game.

He and Davis (19 points per game, 15.4 rebounds) have provided the bulk of the Big Red scoring this year, with key contributions from teammates like Daryl Kirkland, Michael Littlejohn and Jason Loera.

“His point total has increased, his rebounding is up, his shooting percentage has improved, and he’s stepped up vocally,” Guy said. “He’s our best communicator on offense and defense.

“He’s also a great passer, and what doesn’t show up on stat sheets is that he’s a very good defender. He was one of the worst defenders on the team in ninth grade (at Muskegon Heights), but that was just a matter of immaturity. Every year he’s gotten better.”

One thing that’s noticeably different from 2014 is the Big Reds’ record. There is a single blemish that can’t be erased, courtesy of East Kentwood, which upset the Big Reds in a holiday tournament game in December.

East Kentwood, by the way, remains unbeaten and is ranked third in Class A. The tournament bracket has the two teams playing again in the regional finals, assuming they both make it that far.

“It hurt, but not that bad,” Kennedy said about the end of the team’s 31-game win streak. “We knew it was early in the season and we still had a lot of young guys learning and growing.

“I would say losing a game was good for us. It opened our eyes and made us realize we can be beat by anybody in any given game.

“We figure we will play them again. We’re not thinking about the past. We’re focused on the future. We just want to win.”