WMC led by one point with 5:20 left on the clock when both offenses went to sleep. More than three minutes passed without either team scoring a point. 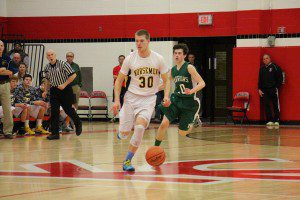 The sophomore broke the scoring drought with a triple with 2:16 remaining, added another a minute later, then sank three free throws down the stretch, helping the Norse escape with a 54-52 victory over the Warriors at Kent City High School.

Fairfield scored 12 of his 19 points in the fourth quarter, including three of his four 3-pointers. His heroics held off a Western Michigan Christian squad that battled to the end, even when it looked like the game was out of reach.

After the game Fairfield admitted he had a case of nerves, but it didn’t affect his shooting.

“You’ve always got a few butterflies floating around, but that’s a good thing,” said Fairfield, a first-year varsity player. “I just saw the open shots and my teammates did a great job of kicking it out to me.

“It’s a great feeling, a great team win, and everybody played a part in it.” 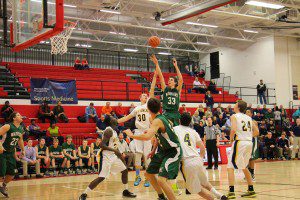 WMC’s Jacob Ray gets up for the shot at the elbow. Photo/Jason Goorman

North Muskegon Coach Chuck Rypstra acknowledged that Fairfield is not a typical sophomore.

“He hasn’t played like a 10th-grader all year,” said Rypstra, whose team avenged a regular season loss to WMC. “He wants the ball. You saw him take the shots. Everybody else (on both teams) was seizing up, and he just took them.”

The game was close from start to finish.

WMC led 7-3 in the early minutes before the Norse found their range and grabbed an 11-10 lead after one quarter.

Fairfield scored seven points in the second quarter, including a three-pointer and four free throws, to help North Muskegon stay on top 25-20 at halftime. 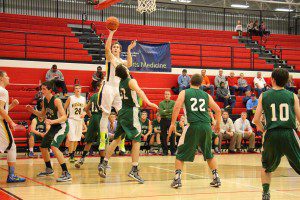 The Warriors’ Kyle Kingma dropped in eight of his game-high 23 points in the second quarter, allowing the cold-shooting Warriors to keep the game close.

WMC opened the second half with an 11-2 run, powered by five points from Jacob Ray and four free throws by Kingma, and pulled ahead 31-27. But Bleakley broke the slump for the Norse with a 3-pointer, and his team clung to a 36-35 edge after three quarters

Fairfield opened the fourth quarter with a triple, but WMC got a three-point play from Kingma and a bucket from Devin Eekoff to take a 40-39 lead with 6:25 left.

The Warriors led 42-41 with 5:20 left, then the point drought arrived and the score remained the same for more than three minutes. 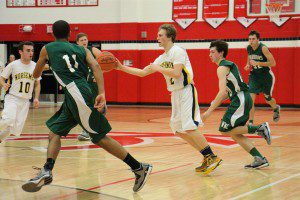 Fairfield’s next two 3-pointers, along with two clutch free throws by Ben Gautraud and a single free throw from Bleakley put North Muskegon up 50-44 with 46 seconds remaining.

Ray hit a triple for WMC eight seconds later, making the score 51-48. The two teams traded free throws, leaving the gap at three points, then the Warriors missed a 3-point attempt that would have tied the score with 11 seconds remaining.

Fairfield nailed two free throws to put the Norse up 54-49 with nine seconds to go. WMC’s Nate Dugener hit a triple with two seconds left, but it was too little, too late.

North Muskegon showed great composure down the stretch, hitting 9 of 15 free throw attempts in the fourth quarter. The Norse finished with a 15-10 scoring edge from the line.

“We’ve been working on that,” Rypstra said about his team staying calm and hitting clutch free throws. “It was good to see it pay off.”

Mason County Central rolls past Montague, Geers puts up 21 points and 12 rebounds for the Spartans

Hesperia fades in second half, falls to 2-5 with loss to Morley Stanwood