MUSKEGON – Great teams usually have more than one player that can step up in games when the spotlight is bright. 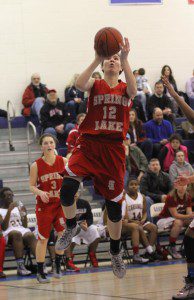 Emily VanWingen goes in for the layup. Photo/Scott Stone

Zuidema had an unusually quiet night Friday in the Class B district finals against Orchard View, only scoring three points.

But it’s hard for teams to shut both girls down.

Johnson picked up the slack offensively, scoring a game high 24 points, leading the Lakers to a 63-42 victory over the Cardinals at Oakridge High School to claim their first district title since 2009.

“It was nice that Reiko took control in the first half,” said Spring Lake Coach Rich Hyde, whose team is now 23-0 on the season. “Her play loosened the rest of the team up and allowed her to find open players in the second half to help us bust the game open.”

The Lakers will play Sparta on Tuesday night in a Class B regional semifinal.

Johnson scored 19 of her 24 points in the first half, including three big 3-pointers.

“We had to come out firing against Orchard View,” Johnson said. “When O-V gets just a little bit of confidence they really pick up their pace. 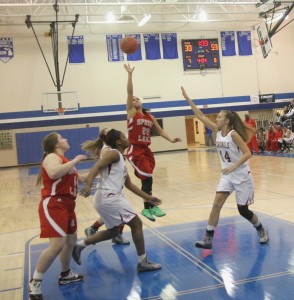 “It is really cool getting this district title with an undefeated record. It’s really amazing and I did not expect that.”

The Lakers opened the second quarter with an 8-0 run, with seven coming from Johnson.

The Cardinals recovered in the latter part of the second quarter, going on a 13-8 and trailing 29-22 at halftime.

Orchard View cut its deficit to 33-28 with 4:40 left in the third quarter, but that was as close as the game would get. The Lakers closed the third with a 13-3 run, with Randi Rice scoring six of her nine points. 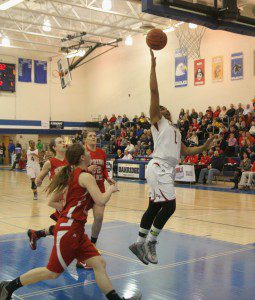 Amiya Brown gets to the hoop for Orchard View. Photo/Scott Stone

Spring Lake had a 17-11 fourth quarter advantage. Nora Adkins scored seven of her 12 points in the final quarter.

Jayshonna Blackshire led the Cardinals with 16 points while A’mari Brown had 11.