The West Michigan Lake Hawks are champions of the ABA’s North Central Division and remain in contention for a league title.

They claimed the division title and qualified for the ABA regionals with a 98-94 victory over the Motor City Firebirds on Sunday night at Muskegon High School.. 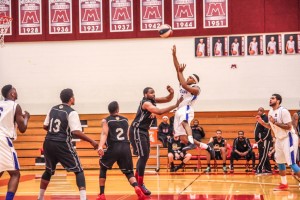 “We find out on Tuesday where we’ll be playing next but it’s just great that we were able to do something that we didn’t do last year and be the North Central champions,” said Lake Hawk Coach Ronald Jenkins. “We got the ball moving up and down tonight and that’s what these championship games are made of.”

The victory didn’t come easy. Motor City turned a 54-48 halftime deficit into a six-point lead midway through the third quarter.

West Michigan did not see the lead again until Jamonte Melton’s steal and layup put the Lake Hawks up 91-90 with two minutes left in the game.

“When Jamonte made that play, it changed the whole outlook of the game,” said Jenkins. “It gave us the momentum we needed to refocus and clamp down defensively.” 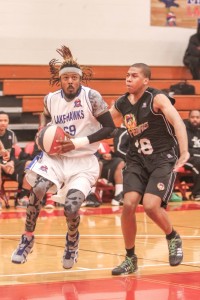 Ralph Monday gets ready to power up for the layup. Photo/Joe Lane

West Michigan’s Idell Bell sealed the win in the final seconds with a steal and layup to complete the final score.

“Both Ralph and Lou dominated inside the paint for us tonight,” said Jenkins. “They were determined to keep Motor City from having second and third chance shots.”

Lake Hawk forward Will Wright put in solid minutes despite battling a difficult knee injury incurred in Saturday’s game. Wright finished with six points but Jenkins was quick to point out Wright did a lot more for his team.

“We were shocked Will suited up after his injury on Saturday,” said Jenkins. “His presence was key for us inside tonight because he makes people adjust their shots. He was a decoy for us and it helped us reach what we were all seeking.”

Coach El: Tommie Elliott gains strength from his wife and daughter as he deals with challenges on the field and off