Courtney Masseau’s two-run homer in the fifth inning put MCC up 5-4 in Game 1. The Jayhawks had trailed 4-0 after the top of the third and scored a pair of runs in the bottom of the third, one run in the fourth, two more in the fifth and another in the sixth. 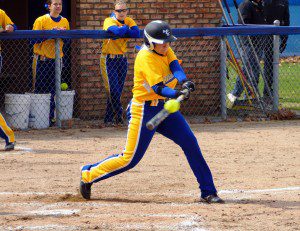 Megan VanderWeele posted a pair of big hits for MCC, including a solo home run in the sixth and an RBI double in the fourth. Katie Hendrickson had a two-run homer, Megan Jean added a two-run triple and Caten Teff had a pair of hits.

Nicole DePender posted the win on the mound and Alex Carpenter had the save. Carpenter entered in the seventh and was able to pitch out of a jam after allowing a walk and an RBI single.

In Game 2, MCC bats exploded for eight runs in the first and six more in the second. Jean led with four hits and five RBIs, including a 3-run homer.

Meghan Birr had a two-run homer run and a single, Morgan Giddings had three hits, Amy Gillings posted two hits and two RBIs and VanderWeele had two RBIs in the win for MCC.

Hendrickson pitched all five innings and gave up six hits in the Jayhawk win.

Back on the college court: Ricarri Stimage leading MCC to another great season