Reeths-Puffer standout Jacob Boes determined to have a great senior season, despite the recent loss of his father

MUSKEGON – They say it’s good to stay busy after a loved one passes away.

For Reeths-Puffer senior Jacob Boes, staying busy means playing baseball. He’s a fourth-year varsity player and one of the top pitchers and hitters on his team. 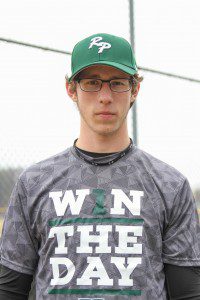 But baseball was a passion that Boes shared with his father, Mark Boes, who passed away suddenly from a heart attack March 1 at the age of 58.

His father coached Boes and his brother, Brett Boes, throughout their childhood years, and was their biggest booster in high school baseball.

“He never missed a game,” Boes said. “My dad coached us all the way from minor leagues through the eighth grade. He was a starting catcher at Muskegon Community College and Grand Valley. He really taught me pretty much everything I know. I really have to give all the credit to him.”

Now everything’s changed in Boes’ baseball world. Instead of glancing at the sidelines and seeing his dad at his games, he has to wrap up his varsity career without him.

But he’s still determined to have the best season possible.

“I’m doing good,” said Boes, who added that the Rockets will be wearing his father’s initials on the shoulder of their jerseys this season. “I think I’m still in the mourning process but I’m trying to get out of that with baseball and spending time with my mom. My brother, who’s up at Michigan Tech, seems to be doing all right.

“It makes it hard (not having his father around), but I kind of take comfort from still playing. I feel like I can still benefit from him during my senior year, because of all the things he told me and taught me.”

Boes seems poised to have the kind of season that would make his father proud, at the plate and on the mound.

Last year he hit a healthy .339, compared to his sophomore average of .275. He only struck out seven times in 70 at bats, compared to 12 strikeouts in 40 plate appearances the year before.

On the mound Boes had a 2-4 record last year with a very good 2.51 ERA in 30 innings of work. That was significantly lower than his sophomore ERA of 3.15.

“He throws around 81 or 82 (mph), which is pretty good for a left-hander,” said Reeths-Puffer Coach Tim Schuppe. “But his changeup is his best pitch. He’s got a great arm slot with it.”

Boes got off to a great start on the mound in the Rockets’ season opener last Tuesday, pitching six innings, scattering three hits, striking out five and walking one in a 5-1 victory over Greenville.

“I felt great on the mound,” he said. “I felt like I was in control and the game was going along at my pace. Once we got through the first inning I think I had only thrown eight pitches. Our defense was great, our hitting was on, and everyone was playing as a team.”

But one game does not make a season, which Boes knows all too well.

The Rockets compete in the tough O-K Black Conference against several very strong teams. While they would love to win the league – and always want to beat rival Mona Shores – Boes’ main focus is the postseason tournament.

Reeths-Puffer has flirted with success in districts for three straight years, losing in the finals each time. Boes was the starting pitcher in the last two title games, losing by one run each time.

“It’s definitely been frustrating,” Boes said. “My sophomore year there was a 30 mph win blowing out to straight center. Last year we had mechanical errors. We weren’t doing what we needed to do with the ball when we got it.”

Boes does not want his career to end without a team photo that includes a district championship trophy.

That’s a feeling he says he has in common with all of his teammates, including returning lettermen Joe Champoux, Jordan Grabinski, Jacob Petrick, Collin Houseman, Brody Vanderlinde and Tyler Moss.

“(The team captains) all got together this year just after tryouts, and we talked about what we wanted this year to be like. We agreed that we all have the desire to win a district title. We’ll do anything just to do that.

“We have a young team, but this year all the guys seem more determined to accomplish goals, like winning districts and beating rival teams. And everyone has gotten better since last year.”

Boes has an extra motivation to help his team win districts this spring. It would be a validation of all the time his father put in over the years, helping him become the best player he can be.

“If we win a district championship all the glory will be for him and God,” Boes said.

Whitecaps give up late runs, fall at Lake County in extra innings after having early lead