Spring Lake captured a Division 2 district softball championship on Saturday with an 11-4 win over host Allendale in the tournament finals. 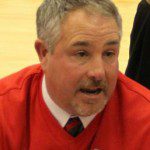 It’s the second major milestone of the year for Core, who also reached 200 wins as coach of the Spring Lake boys basketball team in February.

“We’ve had a lot of great players and coaches, and I feel very fortunate to be at Spring Lake where I’ve had that type of support,” said Core, who is in his 26th year of coaching Laker softball. “This will make my (500th win) easier to remember, coming in a district championship game.”

The Lakers improved to 28-5 on the season. They are the Lakes 8 Conference champions.

“This is probably the best team we’ve ever had,” Core said. “We’ve had eight games rained out this season and if this team had the chance to play those games, we’d have broken the record.”

The Lakers started their successful Saturday with a 15-0 shutout of Sparta in the semifinals. Lindsey Paggeot had three hits and four RBIs for Spring Lake.

The Laker offense exploded in the title game against Allendale, with three home runs.

Madelyn Nelson hit a 3-run homer in the second inning, Randi Rice smacked a solo shot in the third and Katie Mumby added another 3-run home run for Spring Lake in the fourth.

Winning pitcher RJ Marrow scattered six hits and struck out three in the championship game. Maro pitched a one-hitter with seven K’s in the win over Sparta.

“We’ve rotated three pitchers all season and she’s (Maro) been the ace,” said Core. “Today she stepped up really well.”

Spring Lake will face No. 1 ranked Wayland in regionals at Hope College next Saturday. Wayland topped the Lakers 2-0 earlier in the season.

“Because Wayland had been ranked all year and shut us out, our girls know who they are and feel they are ready to compete. It’s going to be a great game,” Core said.