MUSKEGON – Before the Mona Shores varsity baseball players could clean up for prom festivities Saturday evening, they cleaned up on Reeths-Puffer.

The Sailors tallied an impressive 15 hits and roared to a 17-3 mercy-shortened victory over the rival Rockets in the Tier 1 final of the Greater Muskegon Athletic Association City Baseball Tournament at Marsh Field. 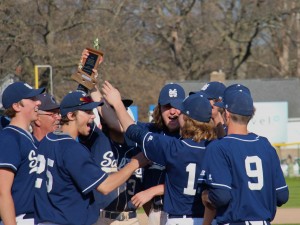 The Sailors (10-8 overall) reached the championship game with wins over Muskegon and Whitehall, and coach Walt Gawkowski admitted his pitching staff was running on fumes with the number of games they’ve played over the past week.

“We patched it together,” Gawkowski said. “We had a lot of tired, sore arms, but I was very pleased with our overall performance. We were able to battle back and still come out on top.

“This (tournament) is a target for us every year, and I’m proud of the way the kids responded.”

It took four different Sailor hurlers to get through five innings against the Rockets, with two – Sam Curran and Eric Nelson – leaving with what appeared to be minor upper body injuries. 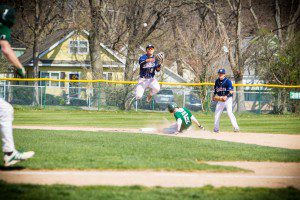 But Mona Shores was never seriously in trouble against the Rockets, thanks to an eight-run second inning that blew the contest wide open. The Sailors sent 12 batters to the plate during the inning, and took advantage of three Rocket errors.

Mona Shores had plenty of big hits from nearly every spot in the lineup, a fact that impressed Gawkowski. Overall, the Sailors had five players with two or more hits in the title game.

“We swung the bats very well,” he said. “That hasn’t been the case for us lately, but today we really battled back.”

Mona Shores center fielder Hunter Broersma displayed his speed throughout the game, legging out a pair of RBI triples to lead the Sailor attack.

“He’s just an incredible athlete,” Gawkowski said. “There’s not a lot of kids that can make it to first to third as fast as Hunter. I love watching him run. And he’s only scratched the surface as far as his potential in baseball.”

Cleanup hitter Noah Dykstra also tallied three RBI singles for Mona Shores, while Ryan Bramer had three hits and two RBIs. Pitcher Logan Vallie got the start for the Sailors, and had a promising two innings, but ran into a rough third inning when he hit three batters and walked two, helping the Rockets score two runs.

Reeths Puffer didn’t collect a hit until the fourth, when the Rockets had three in a row, including an RBI single from Cole Aerts.