Maire was nowhere to be seen in the standings after shooting a first round 76 on Tuesday. 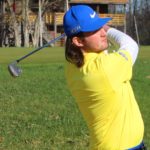 South Mountain Community College (Arizona) won the national team championship, led by Conner Hain, who won the individual championship with a score of 276.