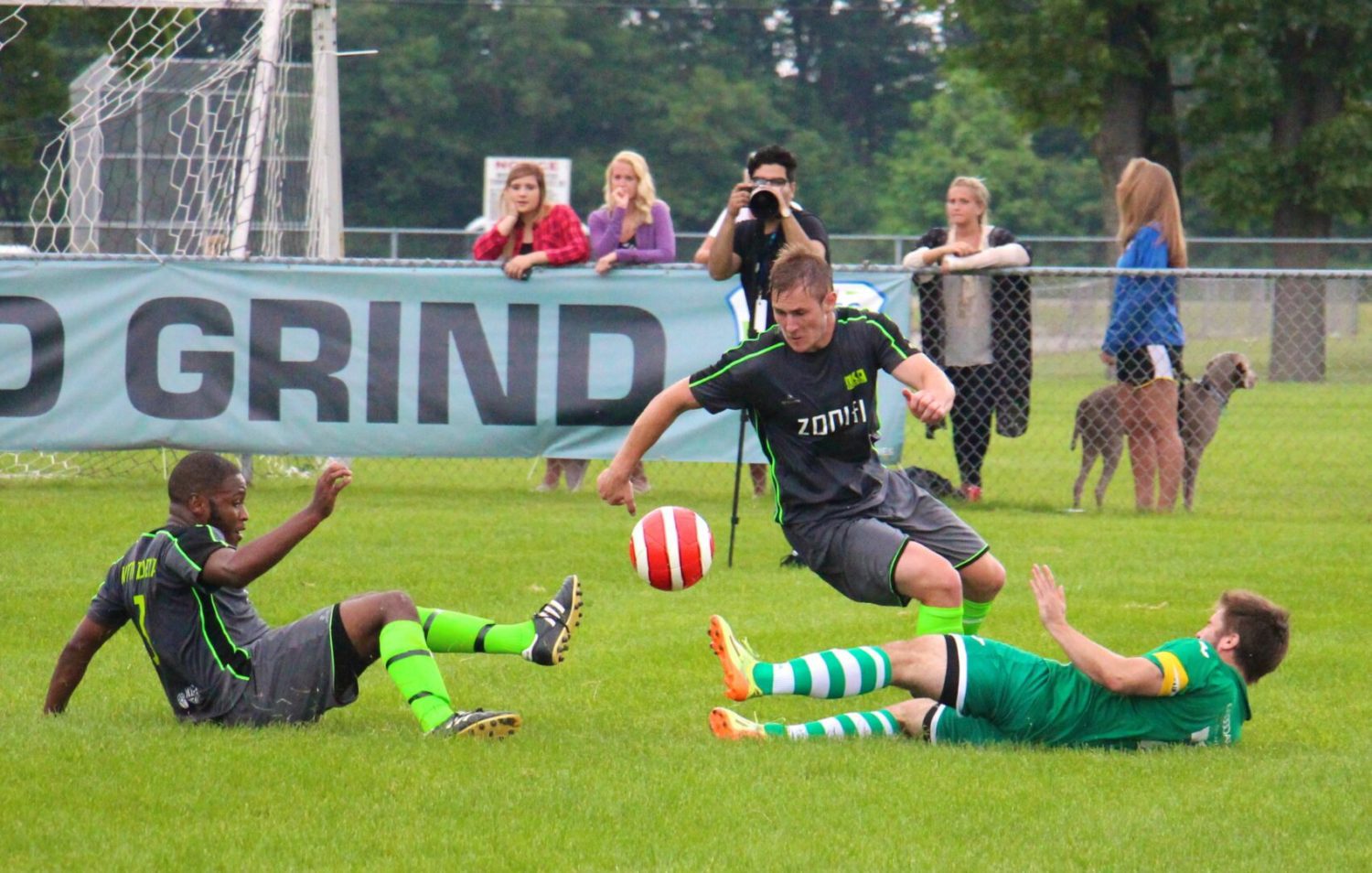 MUSKEGON TOWNSHIP – Three weeks ago, the Muskegon Risers played a chippy match in Ann Arbor, losing 2-1 with a fight breaking out in the 90th minute.

On Saturday, AFC Ann Arbor of the Great Lakes Premier League ventured to Muskegon for the rematch

No fights broke out, but tensions ran high from the start as the teams battled to a 1-1 tie before a large and raucous crowd at Reeths-Puffer High School. 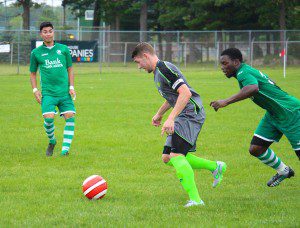 “It’s always big when you beat a team the first time, not to lose the second time, especially on the road,” Ann Arbor head coach David Hebestreit said. “We’ll take a tie on the road, it’s fine.”

Muskegon came out of the gate looking to avenge the previous shutout, applying pressure and peppering Ann Arbor goalkeeper T.J. Tomosso‘s box from the start.

Muskegon’s Jeff McClure came out with three strong scoring chances in the first 15 minutes, but could not capitalize. A new player on the Risers roster, former University of Michigan player and team owner Matt Schmitt, beat the AFC keeper, only to have his shot cleared from the goal line by a sprinting Ann Arbor defender.

“We had an abundance of chances but we just didn’t finish them,” said Muskegon coach David Wood. “It’s a little bit of a downer on the day when we don’t finish the chances that we create.

“Defensively we were very strong, we possessed the ball nicely. The moment when we switched it up at the end of the game cost us and they equalized it up. It’s part of the game, we’ve got to take the good with the bad.” 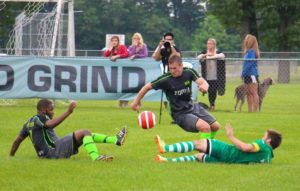 Both coaches, and especially members of the crowd, were questioning some of the referees calls in the first half.

It reached a point that while being heckled, Hebestreit turned toward the Muskegon faithful and exclaimed that he agreed with them regarding the inconsistent officiating.

Changes in strategy were made at halftime that saw Ann Arbor keep up with Muskegon and ultimately control the pace of play in the final 45 minutes.

“We were in one formation in the first half, we switched at halftime and really eliminated the way they were playing,” Hebestreit said. “We were able to get pressure out in the wide spaces so they couldn’t whip balls in like they had in the first half.”

The game remained scoreless until the 71st minute when Man of the Match Sven Moeller made a nice cross pass to Jamie Waters, who found the back of the net, giving Muskegon a 1-0 lead.

After procuring the lead, the Risers went into a prevent defense and decreased offensive pressure, eventually leading to the tying goal.

In the 86th minute, Ann Arbor’s Kyle Breitmeyer evened the score from a rebound that originated off of a Muskegon defender.

“I definitely feel like the team did ultimately start sitting back a little bit more,” Waters explained. “We were a little bit complacent on their goal. We’re not going to blame anyone but obviously we shouldn’t be giving a silly goal away like that. We’ll come back and regroup next week.”

“It feels like we lost the game in certain respects,” said Woods, whose team is now 4-0-1 at home and 4-3-1 overall. “That tie was rough to take, especially given the chances that we had. We had an abundance of chances, we just didn’t finish them. Hopefully we can fix that.”

Jacks ready for regular season finale, quick playoff series, all in the next week