The Legends topped the Dynasty 28-14 in a tight battle.

The teams were composed of 78 seniors from 32 different West Michigan high schools. 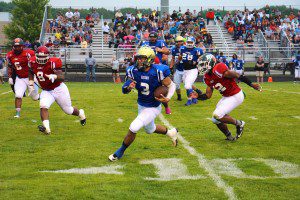 MCC quarterback Nick Holt led the Legends’ winning drive that including a fourth-and-one conversion. MCC teammate Tommy Scott’s two-yard rushing touchdown with 4:15 remaining lifted the Legends to a 21-14 lead and the win.

The touchdown was Scott’s second of the day and capped a textbook MCC-style drive. Legends head coach Steve Czerwon stuck to the run with Holt and Scott at the helm.

“It was a tough go calling offense in that game because you only have the guys for one week (of practice),” Czerwon said. “Getting any kind of cohesiveness on offense is hard to do, so you just try to get the ball in some playmakers’ hands and hopefully they make some plays.”

“I think I performed well with the competition how it was,” Scott said. “To get three TDs and get MVP is a great thing and it’s a great thing they got going for us. There’s guys flying around everywhere whereas in the regular season it might be a little slower. This is just full speed.” 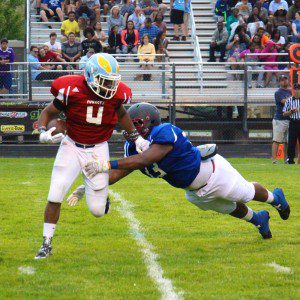 The Dynasty opened the scoring in the first quarter as Mason County Central’s Sean Wells intercepted a Holt pass and returned the ball near the goal line. Soon after, Hundsonville standout quarterback Mason Opple punched in a short touchdown run.

The Legends answered in the second quarter when Holland West Ottawa’s Houston Bedford caught a 22-yard touchdown pass from Muskegon’s Shawn Pfenning to tie the game.

With just 22 second remaining in the first half, Scott rushed into the end zone from a yard out following a rush-heavy drive to give the Legends a 14-7 lead at the break..

The Dynasty tied the game at 14-14 with a one-yard rush from Mona Shores’ DeOntay Moffett late in the third quarter.

The Dynasty had a chance to take the lead early in the fourth quarter, but a 35-yard field goal attempt fell short.

The Legends took over possession and Holt led his squad to the game-winning drive.

“I’m really happy. In the fourth quarter (Holt and Scott) had a chance to do that one more time,” Czerwon said about the game-winning drive. 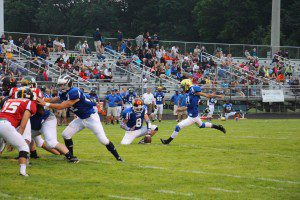 Although the game atmosphere was friendly, the on-field hitting was anything but. Both teams laid crunching hits and swarmed the ball.

Spring Lake’s Nate Batts stood out defensively for the Legends, intercepting a pass, deflecting other passes and made a number of tackles.

“(Williamson) hasn’t said anything to me yet,” Batts said. “He’ll probably say something to me later on when I get to hang out with him. There’s no one else I’d rather pick off. He’s a really good friend of mine.”

Ten scholarships were handed out following the game to both players and cheerleaders. In addition to MVP, Scott took home the Media Explosion Award – a scholarship decided via crowd votes on Facebook and Twitter.