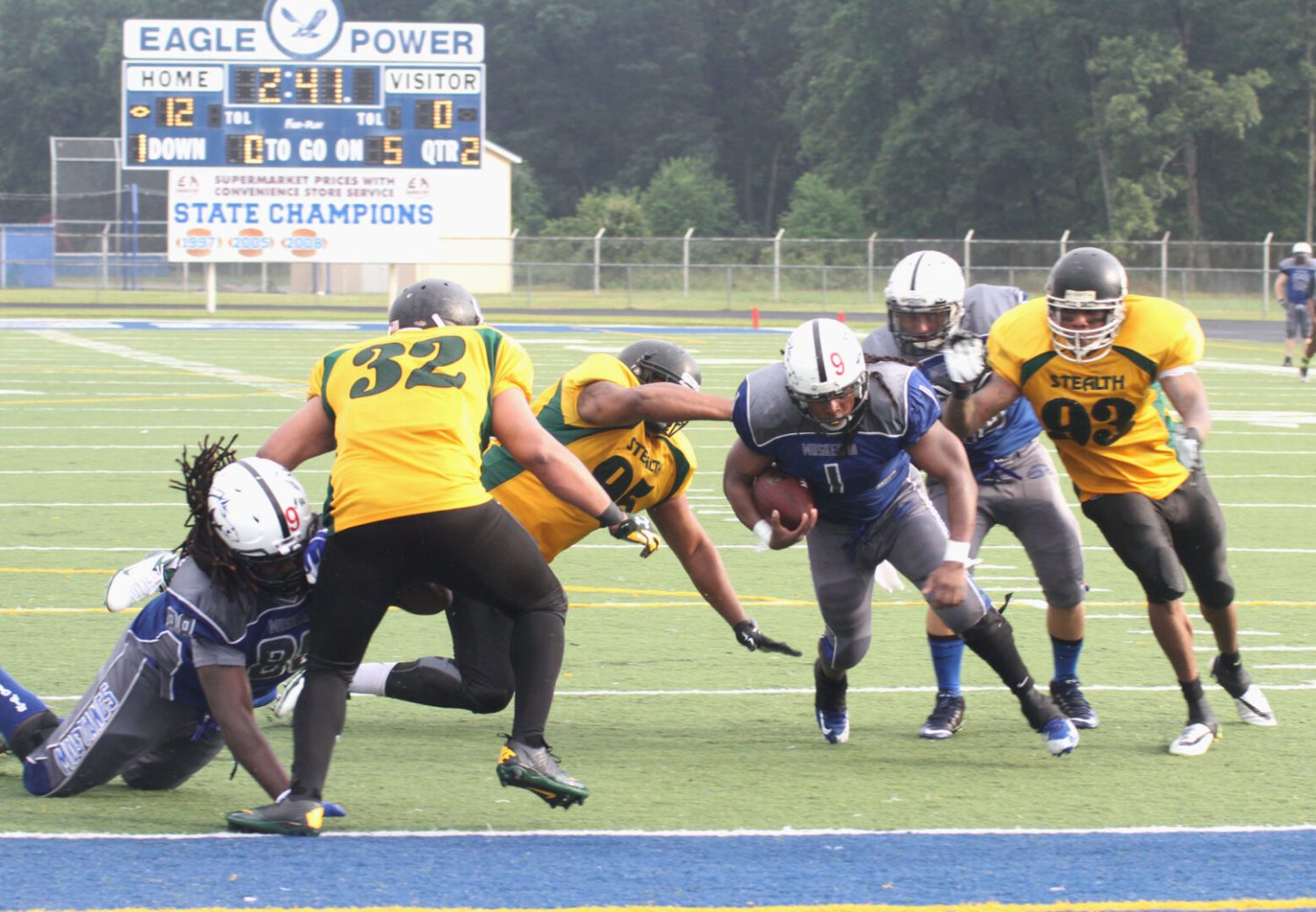 The Mustangs, led by a group of Muskegon Big Red alumni, romped to a 48-6 rain-soaked victory Saturday over the Capital City Stealth at Oakridge High School.

They improved to 5-0 and remained atop the Great Lakes Football League standings. The Lansing-based Stealth dropped to 3-2. 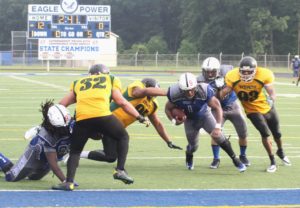 Former Big Reds players were responsible for five of the Mustangs’ seven touchdowns and came up with four interceptions on the night.

Quarterback Aaron James and wide receiver DeMonte Collins put on the biggest show, hooking up for three touchdowns and a two-point conversation.

“It’s like the Staples Easy Button,” said Aaron James, regarding his ability to connect with Collins. “I know he’s going to be open. He isn’t scared to go across the middle and catch it.

“The passes that I probably can’t throw to other receivers I can throw to him. He’s athletic enough to jump over people and fast enough to run by people.”

Aaron James finished 10-of-17 in passing for 161 yards, three touchdowns and one interception.

Keyes also intercepted two passes while McMillian, Hudgins and Shane Pennington had single picks of their own.

“All Big Reds doing that is nice,” McMillian said. “It’s nice having the older generation and the younger generation playing together. We all know what we can do and we know what they can do. They watched us play and we watched them play so it’s just fun.” 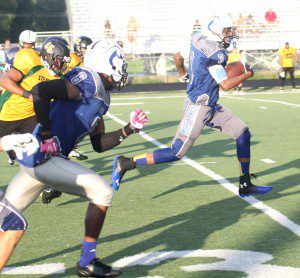 The Mustangs got off to a slow start in the first quarter, hindered by driving rain, close-striking lightning and ear-splitting thunder.

Aaron James found Collins on an eight-yard rollout pass in the front corner of the end zone to give Muskegon a 6-0 league.

The Mustangs were without placekicker Jose Diaz for the game, and went for two-point conversions following every touchdown as a result.

The 6-0 score held late into the half before Eric James punched in a five-yard touchdown run for Muskegon. The conversion run gave the Mustangs a 14-0 lead.

On the last play of the first half, Aaron James floated a 40-yard pass to the back of the end zone. Collins soared above two defenders to snag his second touchdown, as Mustangs took a 20-0 lead into the locker room.

Aaron James found Collins again early in the third quarter to put Muskegon up 26-0, before the Stealth got on the scoreboard with a 68-yard touchdown bomb. 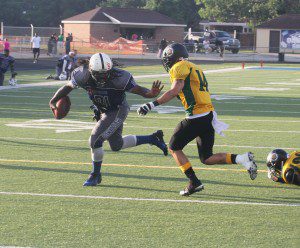 Muskegon’s Demonte Collins gets ready to shake off the hit. Photo/Scott Stone

Less than a minute after that, McMillian jumped a pass from Capital City quarterback Jake Hart and took in back 55 yards for a score.

The Mustangs tacked on one more touchdown with a rushing score by Keyes with 1:56 remaining.

The victory was typical for the Mustangs, who have been romping over opponents for most of the season.

“We’re understanding the team, that there’s no individuals on this team,” said Mustangs head coach Brad Haney. “We’ve got so much talent and the hardest thing is going to be making them understand that they’re not an individual. We’re a team.”

Muskegon will take on the 4-1 Lakeshore Cougars at home on Saturday, July 25. 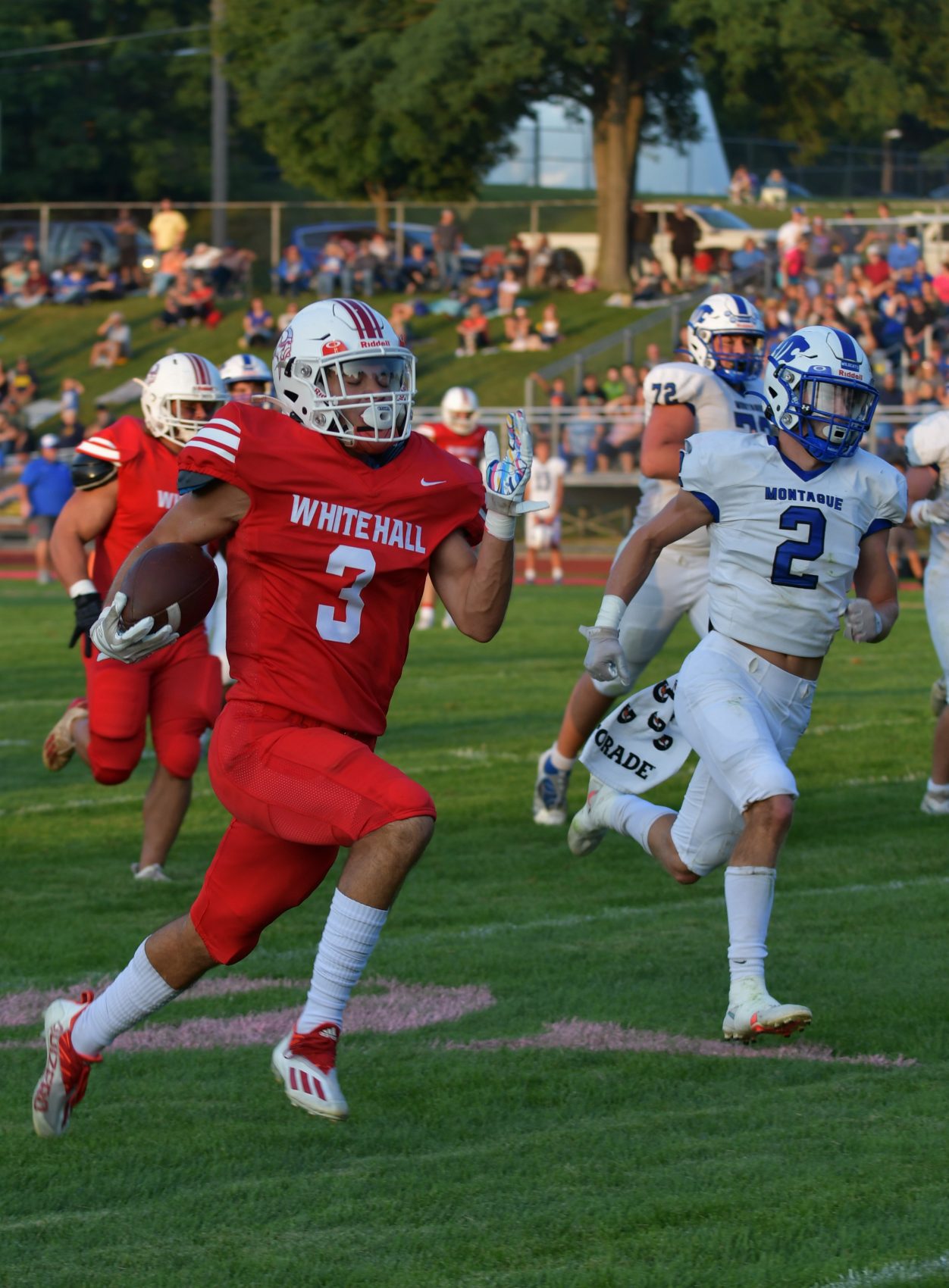 Whitehall routs Montague, 60-6, to win the ‘Battle for the Bell’