Coach Tyrone Williams always suspected that his group of young basketball players could do pretty well against national competition, if they ever had the opportunity.

But his summer team, the Muskegon County Ballers (MCB for short), only played in local and state tournaments for the past few years, due to other commitments.

This year, however, the group of 13-and 14-year-olds had the chance to compete in the American Youth Basketball Tour National Tournament in Fort Wayne, Indiana, and made the most of it. 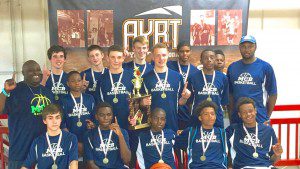 MCB posted a perfect 8-0 record in the tournament over the past four days, and clinched the Eighth Grade Division 3 championship on Wednesday with a 55-48 victory in the finals over Dearborn Elite.

The turning point, according to Williams, was a 46-36 victory over the Henry County (Ohio) Cobras in the third game of the tournament.

“We were down by 14 points with eight minutes to go, and we didn’t want to go out that way, so we went to the full court press and, lo and behold, I don’t think they scored for the next four minutes,” Williams said. “We ended up winning by 10 points.” 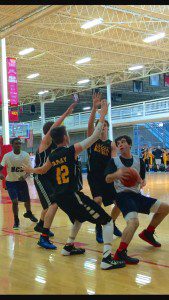 All are Reeths-Puffer students, except for Mosher (Montague), Negen (Spring Lake) and McKenzie (North Muskegon).

The players sold various items to help raise money for the trip to Fort Wayne, and were also assisted by parents and local sponsors, according to Williams. They received a team trophy, individual medals and tee-shirts after winning the championship.

“It was a blast, and it was a good experience for the young men,” said Williams, who was assisted on the bench by Chuck Ware.