GRAND HAVEN – Gabriella (Bella) LeRoux did not plan to test herself against the very best girls high school pole vaulters at the 14th Annual Grand Haven Beach Vault on Saturday.

It’s not that she doesn’t have the skills to compete against the best. The standout from Spring Lake High School won the 14-and-under division at the Beach Vault in 2013, and took fourth in the girls 15-16 age division last year. 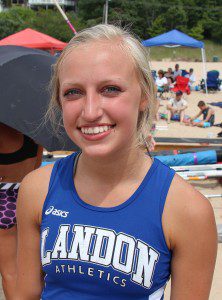 But LeRoux’s plan this weekend was to compete once again in the 15-16 division, where she clearly would have been one of the favorites..

Unfortunately she was unable to compete with the younger group during the scheduled time on Friday, so she tried her hand in in the High School Women’s Elite division on Saturday, which included top pole vaulters from numerous states.

She finished 11th in the division with a height clearance of 11-feet, 9 inches. Morgan Zacharias of Custer Park, South Dakota, won the event with a vault of 13-feet, 1-inch.

Given the level of competition she faced, she wasn’t too disappointed with the outcome. 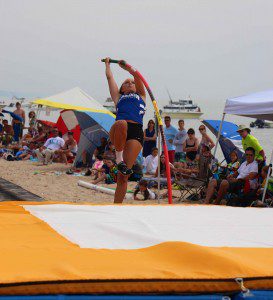 “I think the qualifying height for girls elite was 11-6 and I’m an 11-and-a-half, 12-foot jumper, so yeah I’m feeling pretty good about moving up to another division,” said LeRoux,16.

The future seems extremely bright for LeRoux, who will be a junior this year in high school.

She’s been pole vaulting since 7th grade, a decision she made after watching her older sister, Allie, compete with Landon Athletics, a club that trains and advises elite pole vaulters.

The LeRoux sisters have been standout pole vaulters for Spring Lake over the past few seasons. Allie won the individual state championship in the event in 2014, with Bella nipping at her heels, finishing second in the event.

Bella kept the title in the family by winning the Division 2 state championship this spring.

She took her skills to a new level earlier this year at an indoor meet in New York City. LeRoux cleared 12-feet-four and three-quarters at the event, setting a new West Michigan girls pole vaulting record. 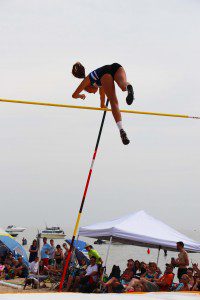 “What makes (Bella) successful is just the way she handles things,” said Jerry Sessions, the founder of Landon Athletics, who was at Saturday’s event. “She wants to be good and she’s always going after the next thing. I think that really helps her.”

LeRoux has started to take pole vaulting seriously in recent years and sees it as a staple for her future.

“I’m really hoping to vault in college,” LeRoux said. “I’m looking at Oregon or Harvard. I definitely want to go to the Olympics so I have to get into the right school.”

The Grand Haven Beach Vault has become somewhat of a mecca for Midwestern pole vaulters, as this year’s field featured competitors from Wisconsin, Illinois, Ohio, Indiana and more.

2015’s event featured a field estimated at 310 – one of the largest fields to date. The event has grown immensely since its inauguration in 2002, a year that registered around 75 athletes.

The event is split into 17 different groups – mixed, boys or girls – and featured competitors between the ages of 11 and 81 this year. 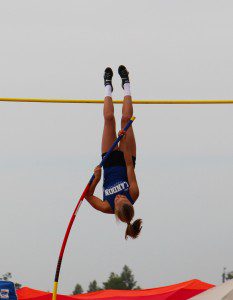 Bella LeRoux looks up at the bar during Saturday’s action. Photo/Jason Goorman

The event features two side-by-side runways that are raised out of the sand. Rather than the beach element being detrimental to vaulters, the necessity to use raised runways gives the vaulters an advantage against their own personal records.

“We practice on (raised runways) at practice,” LeRoux said. “It’s actually easier because it gives you more bounce and sometimes the runways can be leaning downward so you can build more speed.”

The following are winners of each division: 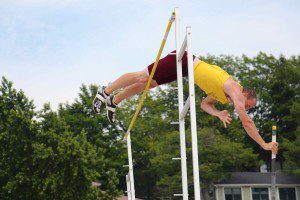 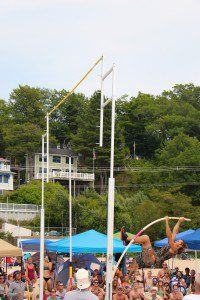