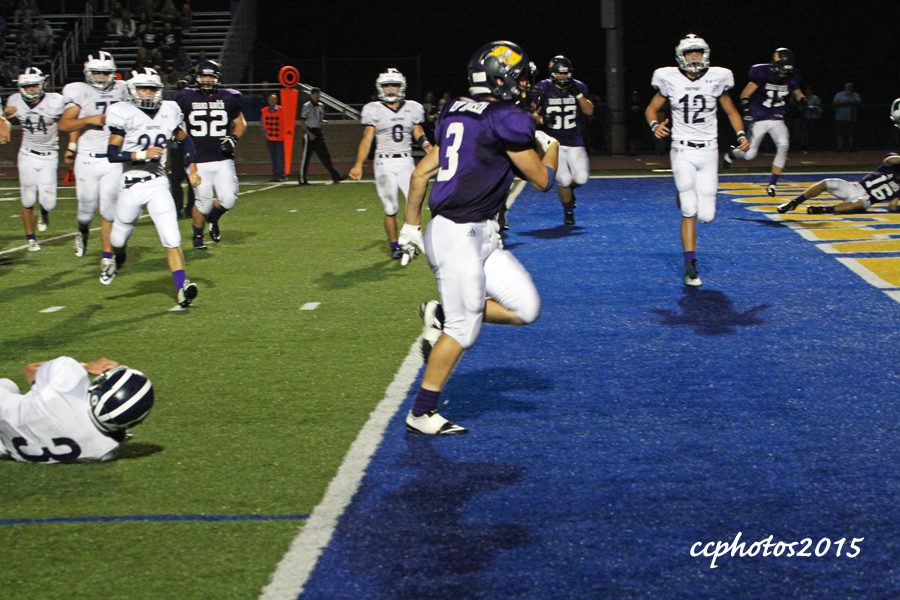 GRAND HAVEN – One of Grand Haven Coach Jason Duram’s goals this year was to fix an offense that was far too reliant on the run game a season ago.

The Bucs accomplished that goal, at least for one week, spearheaded by the dual-threat skills of senior quarterback Levi Overway.

The 6-foot-3, 210-pound Overway ran for a 47-yard touchdown and threw for a pair of scores in the Bucs’ 43-14 victory Thursday over visiting Fruitport at Gene Rothi Field.

“We’ve been working hard all summer, developing that rhythm during 7-on-7s and throwing on our own,” Overway said. “We’ve got some quick guys who can make plays. I really got to give credit to our O-line, though. They fired off the ball all night and were awesome in pass (protection).”

Grand Haven looked like it would have no trouble with the Trojans in the early going, building a 20-0 lead late in the second quarter on touchdown runs from Joey Zelenka, Overway’s impressive 47-yard romp, and a 78-yard connection from Overway to junior wide receiver Brady Jonas.

But Fruitport showed some fight and made it a competitive contest.

The Trojans scored on a nine-yard scramble from senior quarterback Jared Wierengo 33 seconds before halftime, then made it a one-score game midway through the third quarter when Wierengo connected on a five-yard touchdown pass to receiver Zac Miller. 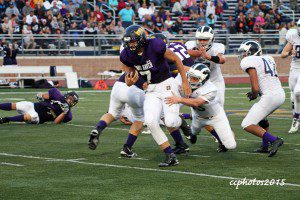 Miller, a 6-2 senior, faked a slant and cut toward the sideline, gaining brief separation from the Bucs’ secondary to haul in the scoring pass.

Duram said the Bucs of last season might have folded under the pressure of an opponent breathing down their necks. That wasn’t the case on Thursday, thanks to another goal they accomplished – avoiding playing anyone on both offense and defense.

“Those types of situations went opposite for us last year,” he said. “But tonight we started 11 on (offense) and 11 on defense and I believe there was not one kid who went both ways.”

The Bucs seemed to play with fresh legs the rest of the way, outscoring Fruitport 23-0 in the fourth quarter. Although they struggled to contain Fruitport’s Wing-T offense throughout the first half, the Bucs buckled down at crunch time.

Fruitport did no damage in its three possessions in the fourth quarter. Grand Haven junior linebacker Drake Morley had a key interception down the stretch. 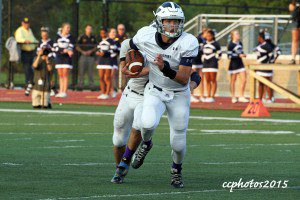 Jared Wierenga on the rush for Fruitport. Photo/Carol Cooper

The Bucs made it 28-14 on a nice fade pass from Overway to senior wide receiver Lukas Steffel to ignite their big fourth quarter. Steffel also caught a 12-yard touchdown from backup quarterback Logan Taylor for the game’s final score.

“The passing game showed up tonight,” Duram said. “And with Levi, he’s a special athlete. With him, Zelenka and Drew Bruursema, we feel we have a three-headed monster carrying the ball out of the backfield.”

Three undefeated wrestlers not enough for Montague on Wednesday