MCC’s iron men: Nate Jones has started every game for three straight years, while Jacob Holt is close behind him

They don’t care about MCC’s current 26-game win streak, which will be on the line Friday when the Crusaders face Oakridge in an early season showdown between two of the area’s best teams.

And the two seniors aren’t focused on their personal consecutive game streaks – 41 for Jones and 39 for Holt – dating back to their freshman year.

“That’s something that’s happened in the past,” the 6-foot, 205-pound Jones said. “We’re not worried about the past. If we focus on that, we’re bound to lose focus on more important things and that’s Oakridge in Week 1.”

“We’re not thinking about our win streak right now,” Holt said. “We have a complete different group of kids out here. We lost a lot of seniors, we’re just trying to rebuild this season, we’re trying to go week by week and hopefully we can get to week 10 (and make the playoffs again).” 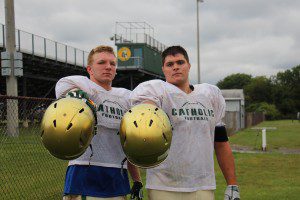 The team winning streak could get MCC into the record books. If the Crusaders are able to reel off six more wins to open this season, they’ll surpass the Muskegon-area record held by Muskegon Heights, which won 31 straight games from 1932 to 1936.

A single victory over Oakridge on Friday will also break the modern Muskegon County record of 26 straight wins, which the Crusaders currently share with the 2004-05 Orchard View teams.

While the precise number of wins in a row doesn’t mean a lot to the Crusaders, getting off to a great start and pushing toward a third straight state championship is very critical to the players, particularly the seven seniors.

In fact, the hysteria had barely died down from the Crusaders’ 31-6 victory over Munising in the Division 8 state finals last year when the returning players started focusing on 2015.

“We started back to work just a week after Thanksgiving,” said MCC Coach Steve Czerwon. “The underclassmen got right back at it. So it’s been a long time coming (for Friday’s season opener against Oakridge). There’s just been so much anticipation to get to this point and so much game planning involved.

“We’re hungry,” he added. “We’ve had some new kids step into different roles, but they’ve carried on that commitment of excellence.”

Jones has been committed to excellence longer than anyone else on his team. That’s simply because he’s started every game since the beginning of his freshman season.

“Nate Jones has played 41 straight games,” Czerwon said. “All at center and since his sophomore year, he’s gone both ways at inside linebacker and center.”

Holt also started as a freshman and has played in 39 straight games. He missed the first two games of his freshman year with an injury.

Holt says its been an honor to play so many games for Muskegon Catholic, but he realizes there’s more than a little luck involved when it comes to avoiding injuries.

“Football is a very tricky game,” he said.  “You know you could take as many hits as you want, maybe you don’t get hurt. One small misstep and you get hurt. There are a lot of things that you have to be worried about as a player. You have to take care of your body.

“It’s definitely a cool feat, having the honor to be part of this great program since I was a freshman.”

The Crusaders will start the season with a lot of inexperience at the offensive skill positions, with stars like quarterback Nick Holt and running back Tommy Scott lost to graduation.

That means more leadership will have to come from the muscle guys like Jones and Holt, who get the hard work done in the trenches.

“I was a little concerned coming into this season at who would step forward and emerge as leaders of this team, but it’s pretty clear that (Jones and Holt) filled that void without question,” Czerwon said.

This season, the 6-foot, 240-pound Holt will be a force on both the offensive and defensive lines at right guard and defensive end. Jones, meanwhile, will experience a new role in his final varsity season, as he’ll switch from center to tight end, but remain a defensive leader at inside linebacker.

“I tell people that it’s like moving down the street, but just like three houses down,” Jones said of the move to tight end. “It’s still the same familiar neighborhood, but this new house might have a pool. You know, now that I might get to catch some passes now and then.”

Jones said he’s cherishing sharing his experience and insight with the new fresh faces on varsity, including recalling his freshman season when he battled at center at 5-10, 175-pounds.

“Jacob and I weren’t handed our spots. We had to earn them,” Jones said. “I remember after my first week of practice, I was so sore and felt so beat up. I remember thinking ‘this is a lot different than eighth grade football.

“You have to be a little nasty, be physical and get angry to go against those 260-pound linemen,” he added. “But it’s all about technique.”