City on Thursday night on its home field.

Ravenna running back David Thompson scored three rushing touchdowns (55, 40, and 14 yards out) and one touchdown reception from 36 yards out. He led the Bulldogs with 229 yards rushing. 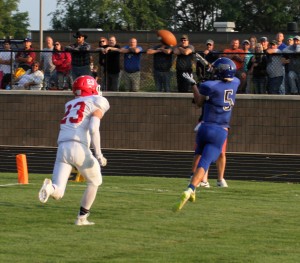 Seth Morgan added a one yard touchdown run for the Bulldogs, while Korson Mundinger scored his first of two touchdowns with a six yard run in the second quarter.

The Bulldogs took a 41-0 lead into the locker room at halftime.

Ravenna closed out the scoring in the fourth quarter on a 44 yard run by Mundinger and a 69 yard fumble return by Dakota Hudson.