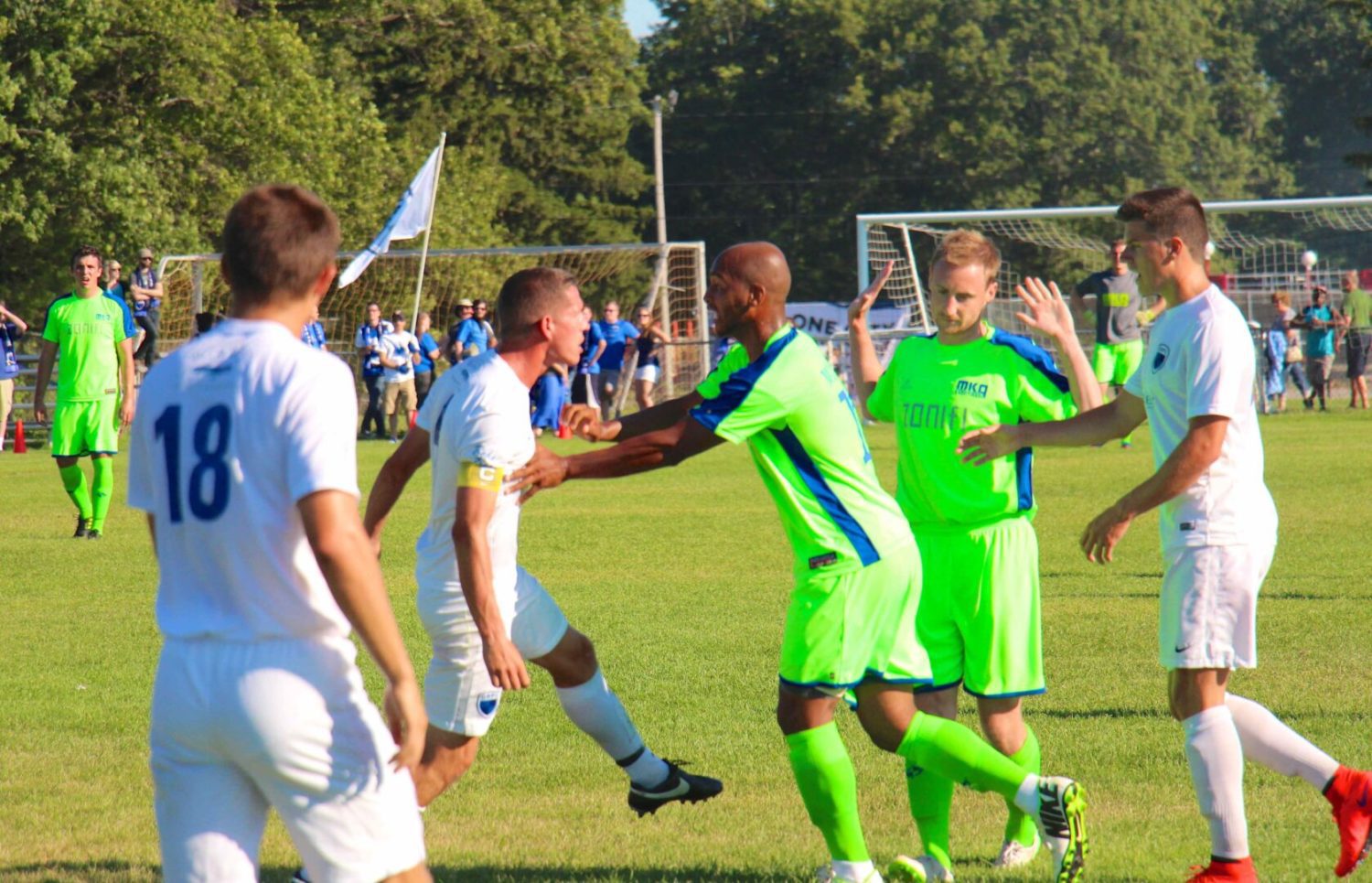 It couldn’t have gone better for the Risers, who grabbed a thrilling 2-1 victory to complete the weekend sweep. Muskegon beat Grand Rapids 3-1 on Friday night in front of a large and mostly hostile crowd  in GR.

The game was again chippy and tense, with both teams engaged in some pushing and shoving throughout the contest. 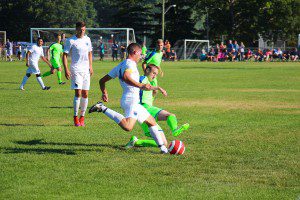 Jai Maw goes in for the slide tackle for the Risers. Photo/Jason Goorman

The Risers won despite being outshot 9-8. They wrapped up their season with a 10-3-1 overall record and an unbeaten 9-0-1 mark at home.

“We contributed a lot to the community this year. When the community is taken care of, they’ll take care of us and that’s what happened.”

The game attracted the largest crowd since opening night, surpassing the expectations of everyone in the Risers organization. The Risers do not release attendance figures, but have been drawing large, exuberant crowds all season.

“We’ve definitely surpassed (attendance predictions),” head coach David Wood said. “Three or four hundred was the goal and the community support has been fantastic. The place has been pretty much filled week in and week out.

“It goes back to how much the community has backed us and what we’re trying to do.” 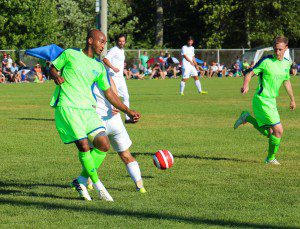 Included in the crowd Friday was a large contingent of The Grand Army, the very vocal fan club of Grand Rapids FC. Members created drama from the start by refusing to step back from the pitch, despite pleas from staff from both clubs and referees. They eventually relented.

The rivalry atmosphere carried over from Friday with physical play throughout, leading to three yellow cards being issued to Muskegon in the first half alone.

But the Risers were able to recover and focus on the task at hand.

Byron Matthews, a reserve player throughout the season, put Muskegon up 1-0 in just the fourth minute. He beat a Grand Rapids defenseman and won the challenge from GRFC goalkeeper Beau Prey before chipping in his first goal of the season.

It didn’t take long for Muskegon to extend the lead. In the 11th minute, striker Brogan Shrimpton beat the entire Grand Rapids defense on the right wing and blasted his shot past Prey to put the Risers up 2-0, the final goal of the half. 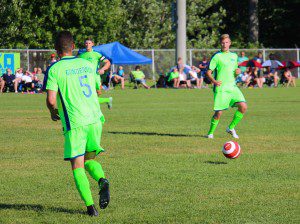 In the 47th minute, Ryan Scott was awarded a penalty kick for Grand Rapids after an incident in the Muskegon box. Scott fooled Richardson and put GRFC on the board.

After a yellow card to Grand Rapids midfielder Nick Abdoo in the 52nd minute, play heated up again with physical play and words exchanged by both teams.

Tempers boiled over in the 59th minute when GRFC defenseman Sean Broekhuizen made a hard tackle on a Risers defender, resulting in a red card, which signifies a game ejection. That left Grand Rapids with just 10 men for the remainder of the match.

Each team had scoring chances down the stretch.

Muskegon’s best chance came in the 76th minute when Prey made an incredible save. The rebound from the shot bounced right back to the Muskegon striker, who launched a perfect shot at the open GRFC net, only to be saved by late arriving Grand Rapids defenseman Cole Dehan.

Grand Rapids made a serious push to tie the game in the 92nd minute, causing Risers goalkeeper Reese Richardson to make another great save. The ensuing rebound went back to the GRFC striker whose shot sailed high over the net as time expired.

“I’d be greedy if I wanted more (out of the inaugural season),” said Schmitt. “We’re always looking to get better. From the second we started the idea of this, it’s always looking at different aspects and working to improve them.”

“That will always be the case but I’d be greedy if I said I wanted more out of this season.”