After a one-win season in 2014, Hesperia is 3-0, with three talented running backs leading the way

Sims learned every nook and cranny of the run-heavy offense while he was a student assistant coach in the early 2000s at Olivet College.

The head coach at the time was Irv Sigler, a Hall of Fame prep coach who earned the reputation as the master of the Wing-T, especially during his two state championship seasons at Belding High School.

“There was no one better to learn from than him,” Sims said. “I picked up a lot of the O-line stuff, the movements and such.

“But as far as coaching, the greatest lesson I learned is to get your guys to give a fanatical effort every play til they hear the whistle. If you get your kids to do that, you’ll be successful no matter what.”

Maybe a little of that mindset has worn off on the current group of Panthers.

Hesperia, coming off a hugely disappointing 1-8 season a year ago, is off to a 3-0 start in Sims’ second season on the Panthers’ sideline. 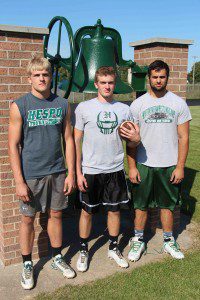 The Panthers host Morley-Stanwood in a key league matchup this Friday at 7 p.m.

“We’ve definitely had some key additions as far as underclassmen coming up, but the guys coming back really got after it (in off-season workouts),” Sims said. “Right after that first Monday after the season ended, you could tell they were intent on righting some wrongs.

“A lot of our games last year, we were tight on the scoreboard. We felt better things were coming our way.”

The better things Sims anticipated are coming in the form of his team averaging over 400 yards of total offense, which has led to 156 total points in wins over Edmore-Montabella, Ludington and Kent City.

If the Panthers stay true to current form, they could have three different players finish with over 800 yards rushing by seasons’ end.

Leading the way is junior Kade Witte, who ran wild for 302 yards and four touchdowns last Friday against Kent City. He has 504 yards and seven touchdowns on the season.

Witte, who started at quarterback for the Panthers last season, said he reluctantly made the position switch at the recommendation of his coaches.

“The coaches told me in the off-season that I should consider running back because it might be a better fit for me,” Witte said. “I wasn’t sure at first, but I went along with it.”

Sims said he was sold on the idea during one of the final games of the 2014 season when the 5-foot-10, 170-pound Witte lined up at running back and broke free from the defense for a 65-yard touchdown.

“Right after that, I said he was going to be our starting running back the next season,” Sims said.

If Witte is Hesperia’s lightning, junior fullback Brandon Goins is the thunder. The 6-foot, 230-pounder has totaled 256 yards and four touchdowns this season. Goins said the Panthers’ dedicated training in the off-season has been key to the early success.

“We had morning lift sessions two days a week and on Wednesdays it was ‘Gladiator Day,'” Goins said. “That was like a cross-fit day. It wasn’t fun, but we just had to grind it out. There were a few pukers.

“It definitely feels a lot better this season, knowing that all our hard work is being rewarded.”

Senior Mark Workman would be a star on a lot of teams, and he’s quietly rushed for 210 yards and five touchdowns for the Panthers.

Sims said Hesperia also wouldn’t miss a beat if he relied heavily on Gage Balkema or Kanin Witte to step into bigger roles in the offensive backfield.

“I’m comfortable with any of those guys,” Sims said.

The Panthers don’t pass often – just 11 attempts this season – but junior quarterback Brendan Mcaree is capable of keeping defenses honest with his arm if they’re intent on stacking the box.

Three of them weigh over 250 pounds, which is a huge bonus (so to speak) for a small Division 7 school.

“It’s the same five as last year and they’ve really matured from last season,” Sims said. “Four of the five are 400-plus squatters. That’s icing on the cake.”

Impressive stats aside, Hesperia has bigger goals in mind, including clinching the program’s first playoff berth since 2002. The Panthers have never won a playoff game in program history.

Both Witte and Goins said the Panthers are trying not to look that far ahead, because as Hesperia learned two years ago, strong starts can quickly turn sour. That season, the Panthers started 4-0 then never won another game.

“Our biggest issue is depth, because we only have 20-some kids,” Goins noted. “But making the playoffs would be huge. It would just show how successful the off-season work was for us. It would be a huge accomplishment, considering where we were last year.”

With a little help from friends, Moyes makes his Week 6 football picks