FRUITPORT – Fruitport won the turnover battle by a wide margin on Friday night, and that led to an easy victory.

Six Ludington turnovers, four in the first half, helped the Trojans to a 56-14 victory on Homecoming and a Lakes 8 Conference win.

The Trojans are now 3-2 overall and 3-0 in conference play. They will meet Muskegon Catholic in an important league matchup next week. 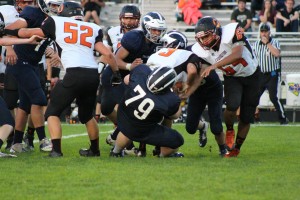 Ludington’s miscues sparked the Trojans to a 29-point second quarter and a 35-0 lead by halftime.

Despite the big halftime lead, it did take Fruitport some time to get its offense rolling.

“We have to solve that problem of getting off to a slow start,” said Fruitport Coach Greg Vargas. “It’s another situation where once we get going, it sparks us and we start rocking.”

The Trojans took the lead before their offense ever got on the field,  thanks to Seth Glover’s 65-yard return for a touchdown on the game’s opening kickoff.

The Orioles’ first turnover came when Fruitport’s Nick Kramer wrestled the ball away from a Ludington receiver, but the Trojan offense sputtered. The drive ended when Ludington’s Andrew Jones picked off a Jarod Wierengo pass at the 1 yard line.

But early in the second quarter, Ludington’s put the ball on the ground and Glover recovered.

Then the Fruitport offense clicked in, led by senior quarterback Wierengo, who scrambled 22 yards to the 5 before Bailey Lynn punched in a five-yard touchdown run.

“We’re talking about what his skill set is and that is it right there,” Vargas said of Wierengo. “That’s what he’s capable of doing. It’s equal parts of Jarod believing in it and doing it and us continuing to give him opportunities to do so.”

On Fruitport’s next drive, which lasted just three plays, Wierengo hit a wide open Matt Sander for a 67-yard touchdown pass to make the score 21-0.

That wasn’t the end of the scoring for Fruitport in the opening half.

Zac Miller picked off a tipped Ludington pass and the Trojans were back on offense. Wierengo rushed for 18 yards and four plays later, he ran the final nine yards into the end zone.

Ludington mounted a drive in the latter stages of the second quarter and drove to the Trojan 21. That’s where the drive ended as Kody Brooks picked off a pass (Ludington’s fourth first-half turnover) and ran 65 yards to the Oriole 20.

With one second left in the half, Wierengo sprinted into the end zone and it was 35-0 at the half.

Despite the wide lead and a running clock in the third quarter, the Trojans pulled off a fake punt and Kramer ran 50 yards to the 5-yard-line. On the next play, Kramer dashed into the end zone.

Ludington got on the board on the next possession when a hard-running Jones broke several tackles then outran the defense to the end zone. That 73-yard touchdown run made it 42-7.

Fruitport made it 49-7 on a one-yard touchdown run by Levi Six. Kramer highlighted that drive with a 32-yard run.

The score went to 56-7 on the next Ludington possession, when Six picked up an Oriole fumble and ran 36 yards for a touchdown.

Jones added a 61-yard run in the fourth quarter for Ludington to cap the evening’s scoring.

“We come in and we talk about taking care of the ball and minimizing mistakes and do our jobs well,” Vargas said. “It’s super important to make people pay when they turn the ball over.”

Despite the two long touchdowns by Jones, the Trojans’ defense was solid for much of the game.

“As a defensive person, you’re never happy when the bust long ones, but you know, we got a lot of kids in,” Vargas said.

“Once we found our rhythm, we did our jobs and continued to hit it,” said Brooks, who had the one interception from his defensive back position.

Wierengo finished 5-for-8 passing for 101 yards and rushed for 72 yards on 10 carries. Kramer rushed nine times for 129 yards. Lynn led the defense with  nine tackles.

Ludington fell  to 1-4 overall and 1-2 in the conference with a game at Orchard  View next week.