SPRING LAKE – Not even the referees could cost Fruitport its first football victory of the season.

The Trojans committed seven penalties on offense, which made scoring a bit of a challenge.

But Fruitport survived the miscues in the annual “Battle of the Bayou” and defeated Spring Lake 22-13 on the road.

It was the Trojans first victory at Spring Lake since 2009. The Trojans are now 1-2 overall and 1-0 in Lakes 8 Conference play.

“I have never been a part of a game like that,” said Fruitport coach Greg Vargas. “We had games where we were heavily penalized but I don’t know what to say about that.

“Spring Lake played a great game, they played four great quarters of football and fortunately our kids did too.”

The Trojans were led by running backs Levi Six (138 yards) and Nick Kramer (90 yards and one touchdown).

Fruitport started the game without starting quarterback Jared Wierengo and Kramer due to unknown team violations. 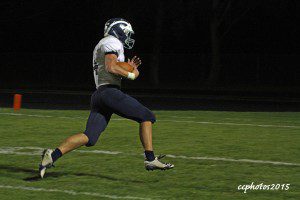 Nick Kramer breaks away from the Fruitport touchdown. Photo/Carol Cooper

Backup quarterback Connor Routt led the Trojans down the field on their first drive, scoring from six yards out on a fourth down and four play.

He connected with Connor Schuitema through the air for a two-point conversion to give Fruitport an 8-0 advantage with 4:04 left in the first quarter.

Kramer gave Fruitport a 15-0 lead with a two-yard touchdown run with 2:26 left in the second quarter.

The Lakers quickly responded with 46 seconds left in the second quarter on a three-yard touchdown run by quarterback Cam Ball.

The Trojans took a 15-7 lead into the locker rooms at halftime.

Kramer scored his second touchdown of the night from five-yards out with 7:01 left in the third quarter to give Fruitport a 22-7 lead.

Spring Lake responded on its next drive when wide receiver Sam Johnson caught an 11-yard pass from Ball at the two-yard line, fumbled the ball into the end zone, and fellow receiver Jason Keena picked the ball up for the score. 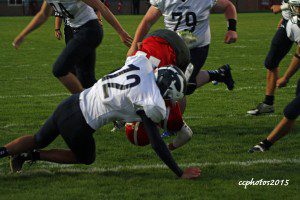 The Lakers failed on their two-point try, leaving them down 22-13 with 2:47 left in the third quarter.

The Trojans had many opportunities to add to their lead and put the game away, but penalties kept stalling their efforts.

But Spring Lake had similar problems, managing 66 yards in the fourth quarter on four drives.