The good news: It didn’t come close to spoiling a wildly successful Homecoming.

Senior receivers Hunter Broersma and Kobe Burse combined for five touchdowns, keying the Sailors’ 48-7 thrashing of visiting Zeeland East (3-2 overall). With the resounding victory, Mona Shores improves to 5-0 – the first time in program history it has reached that mark.

“It’s amazing,” said Mona Shores coach Matt Koziak. “We always talk about this being ‘Team 53’, and there have been 52 teams before us, and none of them have done what we just accomplished. So I told the kids, from here on out, you can make history. So they wanted that bad, and they wanted to do it on Homecoming, which is special.” 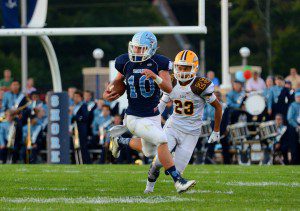 Although Mona Shores rested senior quarterback Tyler Trovinger, who suffered an ankle injury last week at Caledonia, the Sailors were still humming on offense, thanks to a familiar name running the show.

Senior Elijah Wilson, who filled in because of injury and led the Sailors to victory in last season’s Division 2 state semifinals over Farmington Hills Harrison, did the same thing Friday. He did a solid job of getting the ball into the hands of the Sailors’ playmakers and letting them create.Wilson completed 12-of-17 passes for 249 yards and three touchdowns.
Broersma helped the Sailors jump out to a 14-0 lead after one quarter, as he scored on a 11-yard counter run and a 49-yard bubble screen.

Senior Darece Roberson scored on a 10-yard sweep with 4:33 remaining in the first half, and Burse pushed the Sailors’ halftime lead to 27-0 following his spectacular 51-yard touchdown on a wide receiver screen. Burse’s start-and-stop ability froze a pair of Dux defensive backs, allowing the Sailors’ 6-foot-3, 205-pounder to coast into the end zone. 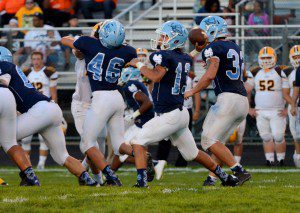 Zeeland East’s pass-happy offense finally broke through the Sailors’ lockdown defense for a touchdown with 3:02 left in the third.

It ended the Sailors’ streak of four-straight games without allowing an touchdown.

“We knew it had to end sooner or later,” said Broersma. “We knew Zeeland East was going to throw the ball all over, so our defensive backs really went at it this week. We just drilled it.”

Zeeland East quarterback CJ Otteman attempted 44 passes, but had little success. He completed 23 of his attempts for just 129 yards.

“This defense is one of the best defenses I’ve ever coached,” Koziak said. “To give up 10 points at this point, you have got to wonder how many teams in history of high school football in the state can say that?”

Broersma added the finishing touches to the victory by returning a punt return 81 yards for a score. It looked like Zeeland East senior Khylin Barton had Broersma cornered near the side line, but the Sailors’ senior eluded the tackle with a swift cutback.

Broersma led the Sailors with three catches for 87 yards, while Burse had five receptions for 84 yards.