MONTAGUE – The Montague Wildcats sent an emphatic message to the rest of the West Michigan Conference on Thursday night.

They are back in the hunt for a league title, and they have the offense to compete with anyone.

In a game where there was no shortage of points, the Wildcats stunned Ravenna 70-48 in an early league showdown on Montague’s home field.

“We know we are,” said Montague Coach Pat Collins, about his team being back to its winning ways following an uncharacteristic 2-7 record last season. “We know what we can do and we know what kind of kids we have. We are all about getting better every day.”

The Wildcats improved to 2-0 on the season and 1-0 in the conference while Collins picked up career victory No. 100.

“What is so special about the milestone is the amount of people involved,” Collins said. “We celebrate head coaches but the assistant coaches and players are a big part of it.” 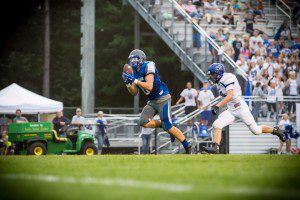 Montague quarterback Jacob Buchberger led the Wildcats,, while rushing for a whopping 254 yards and four touchdowns on 13 carries and completing 6 of 12 passes for 114 yards and two touchdowns.

The first half was a back-and-forth battle, with both teams scoring almost at will.

The Wildcats took a 21-14 lead after the first quarter on a 54-yard touchdown reception by Josh Weesies, a 47-yard run from Brayman and a 65-yard run from Buchberger. 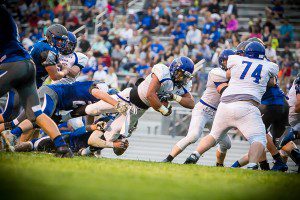 David Thompson dives over the goal line for the first half Ravenna score. photo/Tim Reilly

Ravenna got its first quarter points on rushing touchdowns by Seth Morgan and Korson Mundinger, from one yard and five yards out, respectively.

Ravenna scored four times in the second quarter and led 41-35 at halftime.

Ravenna running back David Thompson was responsible for three of the four Bulldog touchdowns with runs of 29, 3 and 55 yards. Mundinger scored from two yards out.

The Wildcats regained the momentum by recovering an onside kick to start the third quarter. 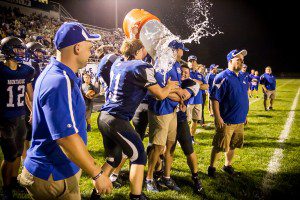 Montague scored all three third quarter touchdowns, including two from Buchberger (a 52-yard run on a fake punt and a 65-yard run) and one from Brayman from nine yards out.

The Wildcats added two fourth quarter touchdowns on a 29-yard run from Buchberger and a 28- yard burst by Bryce Stark.

Ravenna closed the scoring with a 55 yard touchdown on a fumble return by Fred Averill.

“We settled in on defense and the offense continued to play well,” Collins said about his team’s successful second half comeback.

Thompson led the Bulldogs with 241 rushing yards and two touchdowns.

“Where do I begin,” said Ravenna Coach David Smith. “There was very bad defense for both teams tonight.”