MONTAGUE- It looks like there’s a new contender in the West Michigan Conference volleyball race.

Montague, which finished fourth in the league last year, has been surprising opponents with its strong play so far this season. 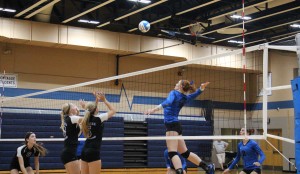 “Our whole team returned this year while Ravenna lost some seniors,” said Montague coach Shawn Bectel. “We are plugging away this season.”

The Wildcats are off to a great start with an 18-4 record.

Bectel thinks it may be possible for the Wildcats to challenge seven-time champion Whitehall in the league this year, particularly after beating Mona Shores in the Reeths-Puffer Invitational finals and taking second place in the tough Western Michigan Christian Invitational.

Ravenna, which advanced to the state quarterfinals last year, has only one senior on its roster.

The difference in experience between the two teams was obvious on the court.

Montague led 8-5 in the first set, then took control by going on a 6-0 run. Junior Anna Olson had two kills for the Wildcats during the run. 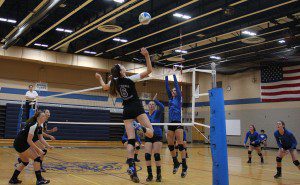 Amber Jacobs gets ready to put down a point for Ravenna. Photo/Jason Goorman

The Wildcats jumped out to a 7-0 lead in the second set with strong serves from sophomore Morgan Roesler.

The Bulldogs cut their deficit to five points at 8-3, but the Wildcats finished strong with a 17-5 run.

Junior Emma Flagstead had a strong second set for the Wildcats, with numerous kills at the net.

Flagstead’s success carried over in the third match, with more strong play in front of the net helping Montague grab a decisive 8-2 lead.

“Emma has been a real catalyst for us this year,” said Bectel. “She has almost 300 kills this year, only a week into the season, she is really doing some special things this year.”

“Our offense did not set up,” said Ravenna coach Kim Platt. “We are a young team. This is a work in progress.”

The Bulldogs are now 7-5 on the season.