MONTAGUE – For the past seven seasons the Whitehall Vikings have dominated the West Michigan Conference volleyball scene.

The Vikings not only won seven consecutive conference titles, but headed into Tuesday’s showdown against Montague with a 54-match winning streak in conference play. 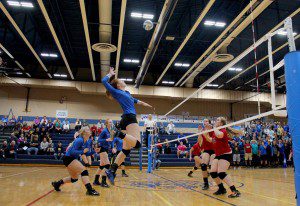 Montague’s Emma Flagstead gears up for the kill during Game 2 action. Photo/Jason Goorman

But that streak came to an abrupt end as the Wildcats defeated Whitehall 3-0, ending the Vikings long run of supremacy.

“It feels good,” said Montague Coach Shawn Bectel, whose team is now 5-0 in league play and 29-7-1 overall. “The last four years we have been putting in the time and effort and this is where it culminated.

“This was the biggest volleyball match in Montague history in the last 20 years. I honestly think we can be state contenders.”

Despite the loss, the Vikings know they are still in contention for an eighth straight league title, which will be determined at the West Michigan Conference tournament.

But they will have to start from scratch when it comes to another conference winning streak.

“The streak was incredible,” said Whitehall Coach Ted Edsall. “It’s really difficult to maintain a streak like that but we have always have gotten everybody’s best effort. 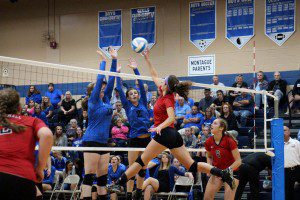 Whitehall’s No. 13 Jessica Uganski sends the ball just out of the reach of Montague’s No. 13 Grace Meacham and No. 2 Robbie Berg. Photo/Jason Goorman

“It has been a great run but we are not over with this year, we still have a chance to win the conference championship.”

Emma Flagstead led Montague in kills and blocks with 17 and eight, respectively.

Robbie Berg also played a strong match for Montague, chipping in two service aces and 19 digs along with 13 kills throughout the night.

Montague started the match strong, only trailing by one point in three different circumstances (14-15, 21-22, 22-23) during the first set before pulling out a tight win.

Chloe Wynn led the Wildcats in the first set with six service points.

The Wildcats had the lead throughout the second set after falling behind 1-0.

Whitehall played its best volleyball of the night during the third set, leading by as many as three points before Montague went on an 8-0 run to wipe out a one-point deficit and take a 17-10 lead.

Flagstead played strong in front of the net,  recording numerous blocks and kills. She recorded the final kill of the match to snap Whitehall’s winning streak.

Dykema and Hekkema lead Rockets past Wyoming in three sets