(Editor’s note: The following story is an excerpt from the September edition of the Local Sports Journal magazine).

BIG RAPIDS – When Jack Schugars retired from Muskegon’s Oakridge High School in early 2011, he figured his days as a football coach were over.

And what a career it had been.

Over the course of Schugars’ 32 years on the sidelines at Oakridge, he amassed the most wins of any West Michigan coach (262), along with three state titles and numerous “Coach of the Year” honors. 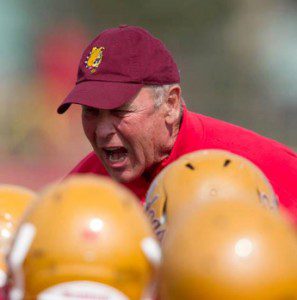 But apart from all the wins and accolades, Schugars was best known for the way he mentored players and cultivated the character traits they needed to be successful both on and off the field.

Schugars enjoyed that aspect of coaching so much that he intended to devote a large part of his retirement to men’s Christian ministry work.

“I was going to speak at men’s groups, ministries, conventions and focus on my ‘Schugars Coach for Life’ website,” Schugars recently told Local Sports Journal.

Those plans changed less than a year into his retirement when Schugars’ longtime friend, former Muskegon High School Coach Tony Annese, asked him to serve as life coach and chaplain for his Grand Rapids Community College football team.

Schugars agreed, and his brand new career as a college football coach was born.

The 2011 GRCC team went undefeated, and Annese was hired to be Ferris State University’s head football coach in 2012. Annese then asked Schugars to join his coaching staff as the Bulldogs’ special teams coordinator.

“I asked my wife if it was okay, and she said ‘I guess,’” Schugars said. “That’s how fast I made the decision.”

So while most people Schugars’ age (69) are slowing down and enjoying retirement, he is spending 12-hour days on the field and in the film room, working with Ferris State’s punters, kickers and long-snappers.

And he’s enjoying every moment of it.

“I’m learning so much every day. I study all the time,” Schugars said. “It’s making me young.”

Adding to his overall enjoyment, no doubt, is the fact that the Ferris State Bulldogs are playing great football. The team went undefeated during the 2014 regular season, winning the Great Lakes Intercollegiate Athletic Conference. This year’s squad entered the season ranked No. 6 in the nation among NCAA Division II teams.

The Bulldogs are 2-0 so far this season, following Saturday’s big 61-24 victory over Grand Valley State University.

All the winning represents a big turnaround for the Bulldogs.

Schugars is familiar with great teams. Three of his Oakridge squads were state champions – in 1997, 2005 and 2008. When asked if there’s a common denominator for all of the successful teams he’s been a part of, Schugars was quick to respond.

“All great teams care about each other and get along with each other,” he said. “They do the things that winners need to do.”

Those qualities are modeled by the coaches, which is why Annese wanted Schugars on his staff.

“He’s got a powerful personality, high character and he wants to make a difference in a young person’s life – everything I’m looking for in a coach,” Annese told LSJ. “He’s got the energy and enthusiasm of a 15-year-old. It’s refreshing.”

Schugars also serves as the “life coach” to Bulldog players, though he’s quick to say every member of the Ferris State staff plays a similar role.

Annese agreed that all coaches mentor players but said Schugars “takes it to a different level.”

“He’s constantly engaged with the players. He’s available to give a kid a hug, to go above and beyond to help them be successful,” Annese added. “The players love him. They feel great that he’s with us.”

For Schugars, the biggest difference between coaching at the high school and college levels is that collegiate players are far bigger, stronger and quicker.

If there’s a downside to any of this, it’s that Schugars’ busy schedule won’t allow him to see all of Traverse City Central’s football games this fall. That’s important because Schugars’ son, Eric Schugars, is in his first season as the school’s head coach.

Schugars’ top three life priorities are “faith, family and football.” That seems to be true for his wife, Julie Schugars, as well. With two coaches in the family, Schugars estimates his wife has seen 500 football games.

“She’s a very special wife,” Schugars said, adding that an annual Hawaiian vacation is her reward for attending all those games.

The love of football is being passed down to the couple’s six grandchildren.

“All my grandkids are Oakridge Eagles fans, Traverse City Trojans fans and Ferris State Bulldogs fans,” Schugars said with a laugh. “This is a very special time – very gratifying.”

Schugars said his decision to keep coaching is a “year by year” situation. As long as he’s having fun, his health remains strong and his family situation permits it, he’ll be out there on the gridiron working with the players.

He summed up his life in football this way: “If you’re a coach, you’ve gotta love kids. Otherwise, why are you doing it?”