By Steve Gunn
LocalSportsJournal.comFRUITPORT – To become a great scorer, it helps to practice against a great defender.

Fruitport’s Noah Hendricks had that opportunity right at home.

Two siblings with opposite skill sets are bound to push each other and make each other better. 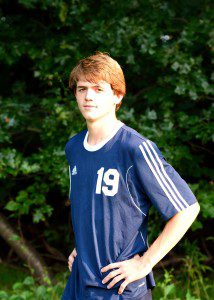 “I really think it was all the one-on-one stuff we did in the back yard,” said Hendricks, a senior forward for the Trojans. “I tried to score on him and he tried to defend me. I think it really helped me a lot.”

That’s apparently the case, because Hendricks has been a scoring machine for Fruitport for the past three seasons.

The current season started with a bang for Hendricks. He scored five goals in a two-game tournament on the first day of the season – including four goals in the first 14 minutes of the first game.

“It just seemed like every time I touched the ball that day it went in the net, whether I tried to score or not,” Hendricks said. “But it’s obviously a long season. You have to keep fighting every game.”

Hendricks has hit some pretty impressive milestones over the past week.

He scored a three-goal hat trick on Thursday against Fremont, and his final tally was the 50th of his varsity career.
On Saturday he had one goal and two assists against Grand Rapids Covenant Christian, moving him to fifth on the all-time Fruitport scoring list.

Ironically the player he passed on the scoring list was Chad Reed, his cousin who graduated from Fruitport in 2005.

“I actually saw him at my grandmother’s house after the game, and he brought it up to me,” Hendricks said. “He asked me if I had passed him that day.” 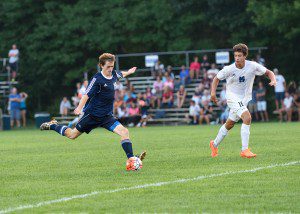 Hendricks grew up in the Orchard View district, and could have easily followed his brother and played for his neighborhood school.

But he says his entire family except his brother graduated from Fruitport, so he transferred before the sixth grade and has never looked back.

Fruitport soccer coach Greg Kobylak has been happy to have him on the team, to say the least.

Hendricks had 25 goals on the JV team as a freshman, and was called up to varsity midway through the season.

He was called up one day after the Fruitport varsity played Orchard View and his brother James, who was a senior that year.

Hendricks found his groove at the varsity level as a sophomore, teaming with senior Zach Gilson to form a dangerous one-two punch for Fruitport.

He finished with 15 goals and 11 assists that year. 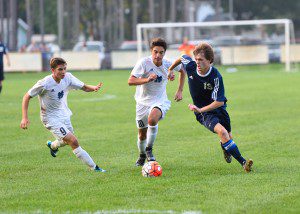 He’s on pace to surpass those totals this season, with 16 goals and 7 assists already and lots of games to be played.

“As a sophomore he had a lot of assists on Gilson’s goals,” said Kobylak, whose Trojans are off to a 7-1-1 start this season. “If teams tried to shut down Gilson, Noah was right there.

“Last year he partnered up with freshman Zack Shane, the two of them hit some (scoring and assist) benchmarks, and they’re continuing that this year.

“His mastery of the ball is unbelievable. He’s so creative one-on-one. He can break anyone down. His speed, agility and strength are a package that has brought him a lot of success.

“Even teams that know how good Noah is have trouble stopping him. He still finds ways to get through them.”

Despite all of his offensive ability, scoring is not Hendricks’ main concern.

More than anything, he says he just wants to win. That’s why, on some days, his name won’t show up on the scoring sheet for Fruitport.

He’s happy to help set up goals whenever possible, if a teammate has a better chance of finding the net.

“The more wins we get, the better,” said Hendricks, who said his own performance has been elevated by having a lot of talented and hard-working teammates.

Kobylak has watched Hendricks set up goal after goal and not receive credit.

“There are very few goals we score that don’t involve Noah somehow,” the coach said. “If we counted assists like they do in hockey, where the two passes get credit, his numbers would be through the roof.”

Hendricks and the rest of the Trojans will be pumped up for a victory next Tuesday, when they face Spring Lake, their main rival, for the first time this season.

The Lakers have also eliminated the Trojans three straight years in the postseason district tournament.

Hendricks said he’s looking forward to his final chance to get the best of the Lakers, whom Fruitport plays twice in the regular season and could face again in districts.

“I think they’re a good team but I also think we can beat them,” said Hendricks, who added that a district tournament championship is his main goal this season. “I respect them because they’re always good but I don’t like losing to them.”