EGELSTON TOWNSHIP – Some fans might suspect Oakridge of having pass-happy coaches.

But the truth is that the Eagles, like most football teams, design their offense based on the strengths of their personnel.

And their four starting receivers are definite strengths this fall. 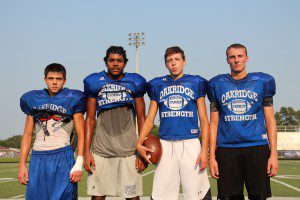 Senior slot receiver Hunter Drummond, a first-game starter, also got in the act, with one catch for nine yards.

There wasn’t much the Crusader defense could do to stop the receivers or Brady Luttrull, their calm and accurate junior quarterback.

“We have four great receivers and my goal is to quickly get them the ball,” said Luttrull, who had a great night against MCC himself, completing 25 of 30 passes for 315 yards. “We take what the defense gives us. If they defend long we go short, if they defend short we go long.

“It’s really nice to have tall, talented receivers. The best thing is to be able to have trust in your receivers.”

While they perform like a well-trained unit, the Eagle receiver corps is a mix-and-match group that came together by coincidence.

Cooper has always been a receiver, but he grew up in the Mona Shores district. He transferred to Oakridge and played his first season with the Eagles as a junior.

Wahr played quarterback as a freshman and sophomore, but was moved to receiver last season when the coaching staff decided to go with Luttrull under center.

Drummond got most of his playing time last season of the kickoff and return teams.

But the four of them have come together to form one deadly threat.

“These guys were good last year, and they all sprouted up a couple extra inches,” said Oakridge Coach Cary Harger.

Harger noted that all four are also defensive backs – Cooper and Drummond are cornerbacks while Wahr and Beattie are safeties..

“It pays to have them play dual roles because you know tricks from the other side of the ball,” the coach said. “We feel that gives us an advantage.”

Height is definitely an advantage for the foursome. Cooper and Wahr both stand 6-3 while Beattie checks in at 6-1.

The height advantage has added to the receivers’ collective confidence. They think they can outjump pretty much anyone and come down with the ball, no matter how closely they’re covered.

“Just throw anything high and we can get it,” said Beattie, who noted that he, Wahr and Cooper all play varsity basketball for Oakridge. “All of us can dunk, basically.”

The Eagle receivers also have numbers on their side.

“(Luttrull) has his first read, but it’s not set in stone,” said Wahr, who noted that the receivers spent a lot of time working out with Luttrull in the offseason. “One guy may be the primary receiver on the play, but if he’s covered, someone will usually be open.”

Wahr figures that he, Beattie and Drummond may get even more looks in coming weeks, because everyone heard about Cooper’s huge night against MCC.

“They’re going to double-team Coop now,” he said. “That will open things up for us.”

Friday’s victory was a far cry from last season’s opening game, when Oakridge was thumped on its home field by Grand Rapids West Catholic, another defending state champion.

That certainly wasn’t the case this year against Muskegon Catholic.

“There’s a quote Coach Harger likes to use – respect all but fear none,” Wahr said. “Last year some of us were nervous, but last Friday I wasn’t nervous at all. I was ready to go.”

“We knew they were going to be good and we had to be ready, but we weren’t scared at all,” Beattie said. “Everybody was nervous for us, but we knew we could win if we worked hard all week and knew our assignments.”

The challenging start to the new season is not over the the Eagles.

As if it weren’t enough to play and beat a defending state champion in Week 1, the Eagles will host Detroit Loyola, the defending Division 6 state champion, this Friday.

Is that too much to ask of any team? Not at all, according to Wahr. 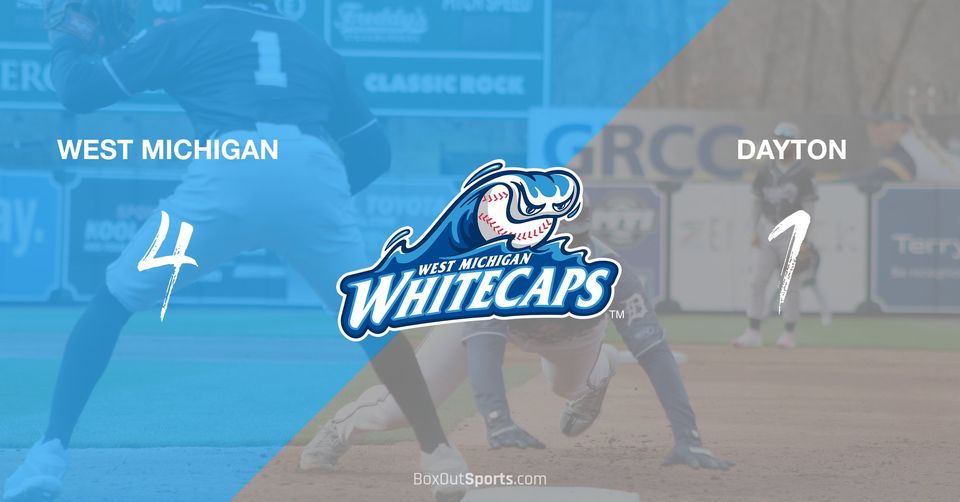 Whitecaps Take 5 of 6 in Dayton