EGELSTON TOWNSHIP – Everyone expected Friday’s Oakridge-Ravenna football showdown to be a high-scoring affair from start-to-finish.

That was understandable, considering the two teams came in averaging a combined 94 points per game.

But the offensive fireworks didn’t really begin until the fourth quarter, and they all came from Oakridge.

The Eagles outscored Ravenna 25-0 in the final frame to steal a 46-19 victory at Russell A. Erickson Stadium.

“That was a slugfest,” said Oakridge Coach Cary Harger. “It was a matter of who was going to hang on the strongest and the longest.” 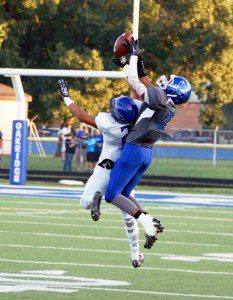 James Cooper goes up for the catch for Oakridge. Photo/Sherry Wahr

Oakridge jumped out to a 13-0 lead with two first quarter touchdowns.

Nate Wahr caught an 11-yard touchdown pass from quarterback Brady Luttrull to give the Eagles a 7-0 lead with 8:04 left.

The Eagles scored on the second play of their next possession when wideout James Cooper III caught a pass from the line of scrimmage at the Oakridge eight yard line, then pitched the ball to running back Kolin Chahorski, who ran 92 yards untouched to give the Eagles a 13-0 lead.

It looked as the Eagles were off and running offensively, but then they experienced a 28-minute scoring drought.

The Bulldogs took advantage of the lull, scoring the lone second quarter touchdown on a 58-yard reception by David Thompson from Nick Castenholz with 2:22 left in the half.

Ravenna tied the game 13-13 with 3:12 left in the third quarter on an eight yard run by Korson Mundinger.

Oakridge responded with a scoring drive of its own, going 70 yards in five plays that ended with a 28-yard touchdown run by Luttrull.  He completed a pass to Cooper III for the two-point conversion to give the Eagles a 21-13 lead with 1:00 left in the third. 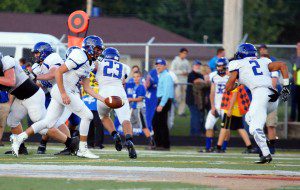 Nick Castenholtz hands off to David Thompson, with No. 23 Seth Morgan leads the way for Ravenna. Photo/Sherry Wahr

The Bulldogs quickly answered on their next play from scrimmage with a 70-yard scoring pass from  Castenholz to Thompson. Ravenna failed on its two point conversion, keeping the Eagles ahead 21-19 heading into the final quarter.

Luttrull went 15-for-23 passing for 321 yards and three touchdowns while Chahorski had 161 offensive yards (68 rushing and 93 receiving). 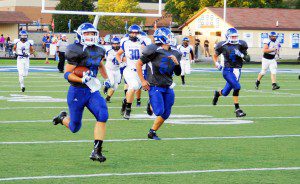 Colin Chahorski runs toward the end zone for an Oakridge TD. Photo/Sherry Wahr

Cooper III led the Oakridge receiving corps with 146 yards on six catches and one touchdown.

“We are not to the level where we need to be right now,” said Ravenna Coach David Smith. “We have to fix us and that is what we will do.” 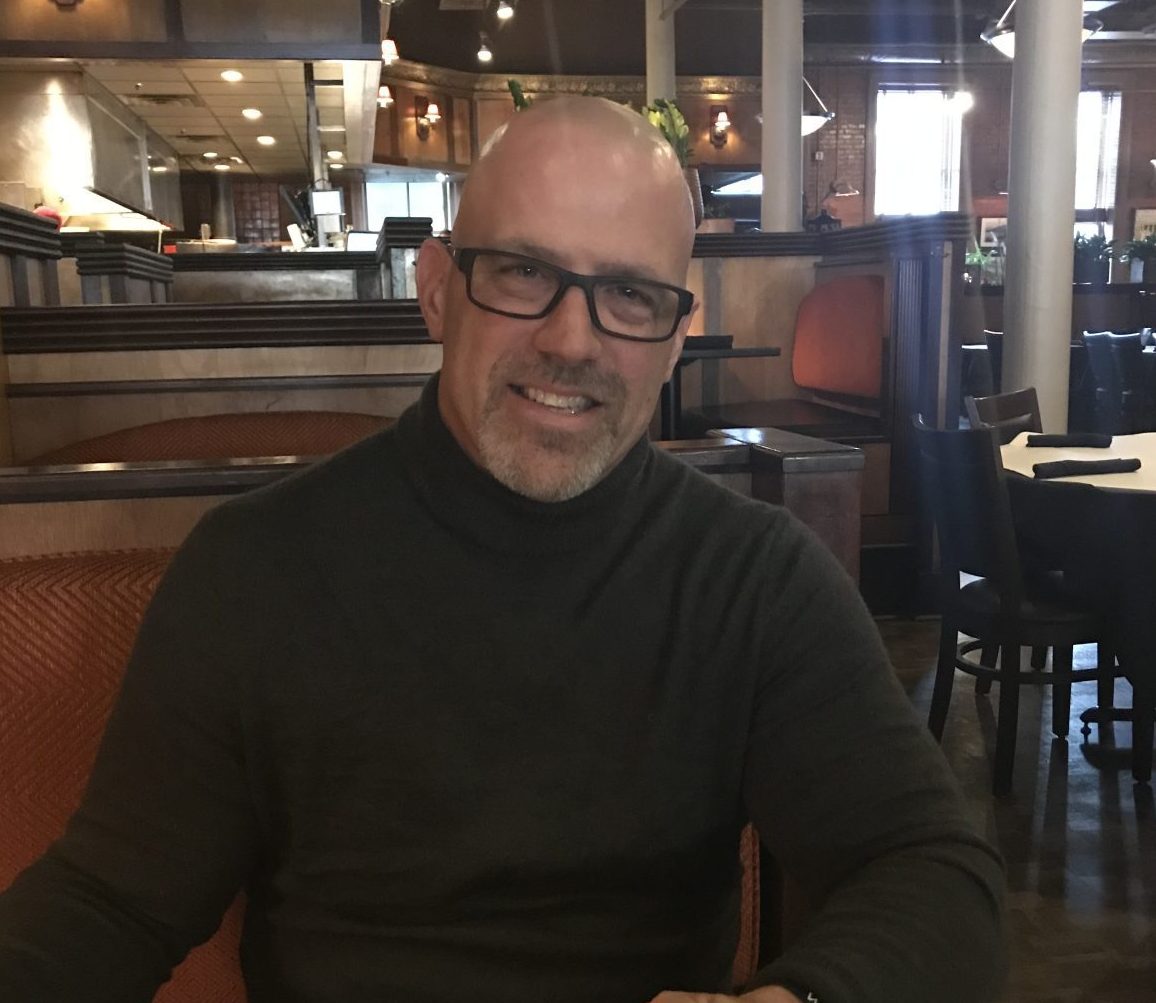