EAST GRAND RAPIDS — It was far from a mistake-free effort by the Muskegon Big Reds Friday evening at Memorial Field, but there was enough KP and PP to provide a TKO.

After a season-opening loss, the Big Reds have now won three straight. East Grand Rapids lost its first game of the season.

Featuring arguably two of the most storied prep programs in the state of Michigan, Muskegon now holds a 2-0 series lead over East Grand Rapids. The Big Reds defeated the Pioneers last season at Hackley Stadium, 37-7.

Muskegon’s venture to challenge the Pioneers on their home turf did not come without some conflict.

Muskegon committed 10 penalties and turned the ball over four times, including a botched kickoff and a fumble early in the third quarter that helped EGR erase a 21-7 halftime deficit and tie the game midway through the quarter. 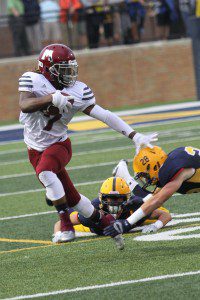 “The game we play, the style, it’s fast and furious,” said Muskegon coach Shane Fairfield. “So those (turnovers) are bound to happen sometimes. Like I told the kids, we’re only a play or two away at any time of making a big play happen.”

Muskegon answered the third-quarter adversity by scoring 21 unanswered points to close out the quarter, coming on blazing-fast touchdown runs by Pimpleton of 53 and 37 yards.

And when the Pioneers’ defense put too much of their focus on the 5-foot-7, 155-pound lightning bolt, running back Jared Pittman burned them right up the middle, adding a 25-yard score to make it 42-21 entering the fourth.

Muskegon finished the contest with 467 yards of total offense. The Big Reds were able to thrive, Pimpleton said, because they continued to trust their game plan, even when turnover trouble presented itself.

“We just had to keep the momentum going,” he said. “We had to keep the crowd hyped. If you stay up yourself, you’re going to keep your teammates up as well. If you’re down, it rubs off on everyone.

“We didn’t get down on ourselves. We knew we could come back.”

EGR scored off Muskegon’s final turnover early in the fourth, but the Pioneers could creep no closer.

Copeland, the 5-9, 175-pound senior, made sure of it, as he finished off the fourth with a 74-yard sprint on a tremendously-executed misdirection run, and later, a 40-yard punt return.

Copeland had 150 yards rushing, coming mostly on jet sweeps, as he easily beat EGR defenders around the corner. 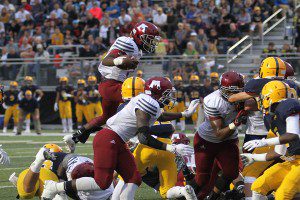 “He makes us so much better, and he’s such a great player,” Pimpleton said of Copeland. “He’s so fast.”

“Yeah, I think so,” Pimpleton nodded. “The thing is, he’s a real popular kid around here, but he’s a humble kid. That’s why we like him.”

Both teams scored on their opening offensive possession, as EGR received nice production from senior running back Matt Solberg, who scored on a 61-yard scamper.

Copeland answered right back for the Big Reds, taking a sweep 80 yards to the end zone, thanks to great downfield blocking from his teammates and a stiff-arm that sprung him loose.

Pimpleton’s first touchdown run made it 14-7 at the end of one, and his 41-yard score at 9:09 in the second featured a highlight reel cutback that left the Pioneers tackling air.

“He’s a warrior,” Fairfield said of Pimpleton. “People may question you, saying why do you have a 5-foot-6 guy playing quarterback? But put a helmet and pads on him and he plays much bigger. He’s such a hard runner and he got smacked hard quite a few times and he still came back.”

Pimpleton said he’s used to the criticism about his size.

The key play, however, was a Big Reds’ stop of a EGR fake punt with under 5 minutes to play in the third that kept momentum going in their favor.