Entering Friday, both North Muskegon and Ravenna had 1-2 records To get into the playoffs, each team needs six wins, and that means no more than three losses overall.

So both teams were desperate for a victory, which was obvious from the final score. When the smoke cleared Ravenna left town with a crucial 63-40 victory over the Norse.

Ravenna got off to a great start, which proved to be the difference in the high-scoring contest. The Bulldogs scored on their first three possessions to take a 21-0 lead.

On the first play of the game, Ravenna senior running back Korson Mundinger bounced out to the right sideline and scrambled 69 yards to put the Bulldogs up 7-0.

After a North Muskegon three and out, Ravenna senior quarterback Nick Castenholz connected with Logan Jacobs for an 18-yard touchdown on fourth-and-13 to go up 14-0.

North Muskegon was forced to punt again and Ravenna went on a seven play, 63-yard touchdown drive, culminating with a 38-yard touchdown pass from Castenholz to Jacobs that extended the lead to 21-0.

“The defense is obviously a big issue for us,” said North Muskegon head coach Mike Belmonte. “I just got done telling the boys, ‘We play defense on Friday like we practiced it on Monday, Tuesday, and Wednesday.’

“Until we show up on Monday, Tuesday, Wednesday and play defense better, it’s going to be another night or two like this. The guys understand so I’m really looking forward to Monday.” 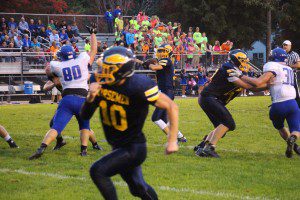 North Muskegon QB Erick Bleakley gets ready to connect with Riley Fairfield on a TD pass in the second quarter. Photo/Jason Goorman

North Muskegon finally got on the board on its next drive, three minutes into the second quarter. Erick Bleakley launched a 22-yard pass to the end zone that was brought down by Riley Fairfield to make the score 21-7.

It took no time for the Bulldogs to bite back. On the ensuing kickoff, Mundinger followed his blockers all the way to the end zone for an 87-yard touchdown, putting Ravenna up 28-7.

Before the first half ended, Ravenna added touchdowns from Alex Jawor and Mundinger, and a 12-yard scoring pass from Castenholz to Tierstyn McBride.

North Muskegon’s star halfback Vernonell Smith returned a kickoff 93 yards to cap the first half scoring with Ravenna up 49-20.

Ravenna went up 56-20 early in the third quarter on a David Thompson 10-yard rush that started a running clock.

The Norsemen would not accept that, scoring the next two touchdowns to get within 56-34. Smith got one with a six-yard run, while Bleakley connected with Fairfield on an eight-yard scoring pass.

Thompson finished Ravenna’s scoring with a 10-yard run with 6:11 remaining. 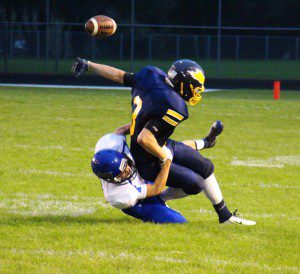 Smith scored a two-yard touchdown for North Muskegon with two minutes remaining to finish the scoring.

Ravenna placekicker Mason Averill was 9-for-9 in PAT kicks.

Smith accumulated 151 yards on 24 carries and four touchdowns. He also finished with 16 tackles on defense.

Castenholz finished 11-of-18 through the air with three touchdowns.