Whitehall proves it can play from behind, overcoming a 14-point deficit and beating Mason County Central 41-14

After being down 14-0, Whitehall scored 41 unanswered points to beat Mason County Central 41-14.

Sigmon was more than pleased with his team’s response to adversity.

“We’re not going to lose much sleep tonight as a staff because of the way our kids responded, that’s huge for us and is going to be a big thing for us down the road,” said Sigmon, whose team improved to 3-0 on the season and 2-0 in the league.

Spartan quarterback Spencer Knizacky punched in a one yard touchdown run midway through the first quarter to give the Spartans a 7-0 lead.

In the second quarter Knizacky floated a perfect pass to Austin Tyndall from 22 yards out to put the Vikings up 14-0. 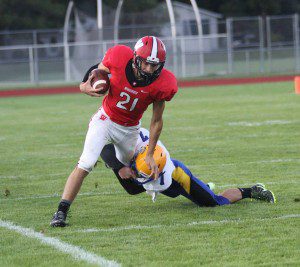 But Whitehall rallied with a pair of touchdowns to tie the score 14-14 at halftime.

Aylor scored the first with a one-yard score, capping a 55-yard drive.

Then Aylor hit Connor Rake with a 30-yard scoring strike to tie the game up 14-14 at halftime.

The Viking defense took over the game in the second half, surrendering no points while only allowing 31 yards.

Aylor picked up another passing touchdown when he found his brother Keenan Aylor from 13 yards out with four minutes left in the third quarter, putting Whitehall up 21-14.

Only minutes later, Jwan Britton capped off an 86-yard drive with a 14 yard rushing touchdown, giving the Vikings a 27-14 edge.

Aylor added a one-yard score with about eight minutes left in the game, then Joe Dowdell capped the scoring with a minute left on a four-yard touchdown plunge.