NORTON SHORES – It took Dylan Mines one game to realize he needed to shoot and score more goals this season.

His Western Michigan Christian soccer team had just lost its season opener 6-0 to Mona Shores, with only a handful of shots on goal. 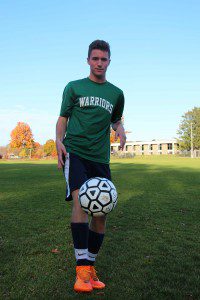 While the Warriors are a traditional soccer power, there was no guarantee of continued success this fall. Several big scorers from last year’s team had graduated or transferred, and someone had to step up.

That turned out to be Mines, as the local headlines screamed throughout September and October.

And so it went for most of the fall. Mines is currently at 30 goals, after scoring 13 last year as a sophomore.

“It wasn’t that I was afraid to shoot last year,” Mines said. “I was more worried that if I shot and went wide my teammates might feel negative toward me.

“I’d say after the first game this year, when we had like two shots and neither were good shots, I figured I could help my team by providing more shots and good shots, and I tried to do that. When we played Orchard View and I had four goals, it showed I could really help my team.”

The rest of the story is still unfolding for Mines and the Warriors.

As the season went by, more WMC players found their scoring range, taking the pressure off from Mines. A good example came in last Friday’s district finals against Muskegon Catholic, when five different Warriors put the ball in the net – Mines, Evan Fles, Owen Alfree, Tyler VanBeek and Hayden Hubers.

That kind of multi-faceted attack has the Warriors pumped up about this week’s Division 4 regional tournament in Traverse City.

WMC (15-5-1) will open Wednesday against Charlevoix (21-3-2). If they win they will play in Friday’s regional final against the winner of the Grand Rapids Covenant Christian-Leland game.

The winner of the regional tournament will advance to the Division 4 state semifinals.

“We really counted heavily on Dylan to score at the beginning of the season,” said WMC Coach Dave Hulings. “He was pretty much the guy. But now we’re pretty balanced. It’s nice, because opponents can focus on Dylan and we have six to eight other guys who can score.”

But that doesn’t mean Mines, who is already a third-year varsity player as a junior, won’t remain a threat to score a big goal – or two or three – like he did with a hat trick against Fruitport Calvary Christian in the district semifinals.

“He has a lot of confidence,” Hulings said. “You want your striker to think he can score from any place, and Dylan has reached that point.”

Hulings said one of Mines’ best attributes on the field is his “ability to find space where there is no space, other than having to really work hard to create space. You give a good forward like him an inch and they will take a mile.”

Mines credits his teammates for making his job easy.

He says he has great chemistry with Fles, a fellow forward who has assisted on a lot of Mines’ goals.

“I’ve had so much help from Evan – he makes such perfect passes – and my whole team has helped create opportunities and set up goals,” Mines said.

A regional title and a berth in the state semifinals would be particularly meaningful for Mines and the Warriors, following last season’s crushing 3-1 loss to Grand Rapids Covenant Christian in the semifinals.

Covenant Christian benefited from two fluke goals, which WMC was unable to overcome.

“We remember that game and remember how it felt,” Mines said. “It’s just hard to end the season like that. It would be nice to see (Covenant Christian) again in the regional finals.

“The minute last season ended the returning players had a talk about what we needed to do. We put in a lot of effort over the summer, just so we would be ready and fit for this season.”

Team effort – particularly when it comes to conditioning – could be the key ingredient that allows the Warriors to return to the state finals for the first time since 2011, according to Mines.

“I think last year’s team might have been better fundamentally, but there wasn’t as much effort,” Mines said. “It’s all about effort. This team conditions so well, we have most of the teams we play beat by how well we can run and how deep our bench is.”

Montague wrestling team has an up and down Saturday in Holton