MUSKEGON – Four games into the season, it’s pretty apparent the Muskegon Lumberjacks still have a lot of work to do.

After scoring a combined six goals in their first two contests, the Lumberjacks have only been able to muster two goals in the last two games.

The Lumberjacks are also struggling to stay out of the penalty box. They entered Saturday’s game leading the league in penalties, and that trend continued. 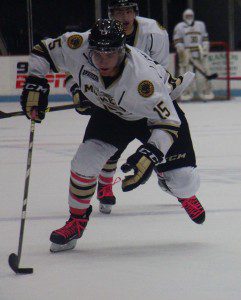 Muskegon’s No. 15 Dante Palecco skates up ice with the puck. Photo/Jason Goorman

It all added up to a 7-2 loss to the Chicago Steel in front of 1,414 fans at L.C. Walker Arena on Saturday. It was the Jacks’ third straight loss following an opening night victory, all of which came on home ice.

Muskegon is 1-3, good for two points and last place in the USHL’s Eastern Conference.

“We took a lot of stupid, undisciplined penalties,” said Lumberjacks Coach Todd Krygier. “There is no excuse for that, we have to make a commitment to play well as a team and do what it takes on the defensive side of the puck.

“Once we do that things will fall into place offensively.”

“He just has to keep working,” Krygier said. “I like him, he is a good young player but where were the other guys tonight?”

The Steel opened the scoring late in the first period with a goal by Karch Bachmin. The Lumberjacks responded in dramatic fashion when Adams beat the first period buzzer with a goal with three-tenths of a second left. Matej Paulovic and Carson Vance assisted on the goal.

Chicago got its lead back with two goals in the second period from Alex Frye and Jake Jaremko at 6:43 and 18:20, respectively.

Brandon Duhaime increased the Steel lead to 4-1 with a goal at the 4:44 mark of the third period. 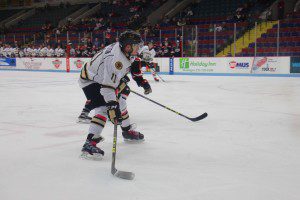 Trevor Hailton gets ready for the wrist shot during first period action for Muskegon. Photo/Jason Goorman

The Lumberjacks cut their deficit to 4-2 on Adams’ second goal of the night, assisted by Rem Pitlick and Trevor Hamilton, at 10:39 of the third period.

That was the closest the Jacks came to a comeback.

The Lumberjacks will head to Youngstown next Saturday to play the Phantoms.