After an opening game win in Waterloo, the Lumberjacks have been beaten pretty badly in consecutive Saturdays at home – to the Team USA Under 17 squad 6-3 and the Madison Capitols 4-0.

Sluggish play in the opening weeks may not be surprising, considering the Jacks are starting with a much different roster this fall. 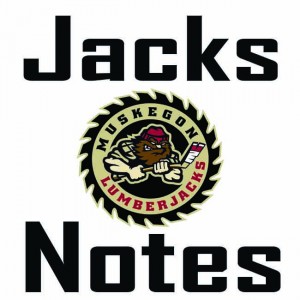 Of the 24 players on the team, 11 are brand new while four – Jacob Coleman, Collin Adams, Alex Green and Zach Berzolla – played only a handful of games with Muskegon last season.

Obviously players who aren’t familiar with each other need to play more games together.

But the schedule has not been on the Lumberjacks’ side in that respect. The Jacks have only played three games in the first three weeks of the season, the fewest in the league. Most other teams have played 4-6 games so far.

“Finding chemistry among the lines and defensive partners has been a challenge, along with managing the extra day of practice and workouts per week,” said Lumberjacks Coach Todd Krygier. “However we have no excuses, no regrets. I have to find a way to make it work so we can be successful as a team.

“We have the least amount of games played in the league and we are tied for being the youngest team in the league, but I like this team. We are fast and we are going to get better. I’m excited about this group of guys.”

The pattern of one game per week will continue for awhile. This Saturday the Lumberjacks will host Chicago at 7:15 p.m. at L.C. Walker Arena and the following Saturday they will play in Youngstown.

There will be three games the last week of the month, all at home. The Jacks will host Chicago on Wed. Oct. 28 in a morning game, then Green Bay on Friday Oct. 30 and Saturday, Oct. 31.

With their 1-2 record, the Lumberjacks only have two points in the standings, which leaves them in last place in the USHL’s Eastern Conference, three points behind eighth place Green Bay.

Cedar Rapids leads the conference with 5-0 record and 10 points. Lincoln and Omaha are tied for the lead in the Western Conference with eight points apiece.

If shots on goal guaranteed victories, the Lumberjacks would be undefeated.

So far this season Muskegon has outshot opponents 124-70. The Jacks have the most shots on goal in the USHL and have given up the fewest shots.

But somehow that hasn’t equaled success.

The Lumberjacks have a total of six goals, the fewest in the league. Their leading point producers are Mitch Eliot with one goal and one assist and Robbie DeMontis with two assists.

Sooner or later some of those Muskegon shots have to start hitting the mark. Right?

“The shots are one of the positives,” Krygier said. “Our guys are working hard and creating chances. We just have to bear down and bury our chances. It will happen.”

The Lumberjacks also lead the league in penalty minutes, with an average of 23 per game. Muskegon has 17 minor penalties, one major penalty and three 10 minute misconducts already this season.

Dubuque is second in penalties, averaging 22.2 minutes per game.

So you think Muskegon crowds could be bigger

The Lumberjacks have had so-so luck with homes attendance thus far.

On opening night they drew a very respectable crowd of 2,831. Last Saturday they only attracted 1,378 fans.

So the Jacks are obviously not drawing like the Sioux Falls Stampede, who had 8,864 for their home opener on Sept. 26.

On the other hand, they are selling a lot more tickets than Chicago, which drew 904 for its home opener on Sept. 26, then only attracted 519 and 476 for its next two games..

Those arenas must be really quiet.