MONTAGUE – Montague football is officially back, even without star running back Cameron Brayman.

After missing the playoffs for the first time in 14 years last season, the 2015 Wildcats began their quest for state title on Friday against a Delton Kellogg team that was limping into the playoffs.

Kellogg entered the contest on a three-game losing streak and was no match for the rejuvenated Wildcats, who dispatched the Panthers 49-12.

The Wildcats, now 10-0, move on to face Grand Rapids NorthPointe Christian next weekend on the road in the Division 6 district finals.

Montague’s victory was particularly impressive considering the loss of Brayman, who missed the game due to an arm injury incurred last week against Fremont. He may return for the playoffs, but not next week, according to Montague Coach Pat Collins.

“This team has been through a lot of adversity after last year and they faced a lot of things this year in adverse conditions,” Collins said.  “Now they face the loss of a leader and team captain (Cameron Brayman) last week. They had to figure out a way to play without him and they did that. It was an impressive effort by our guys tonight.”

It didn’t take the Wildcats long to get on the scoreboard. 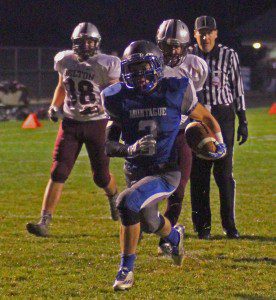 The next Wildcat drive needed just three plays and 50 yards with the big play being a 35 yard sprint by quarterback Jacob Buchberger around the left end. Buchberger was untouched until the two yard line and stretched into the end zone to put Montague up 14-0 after the first quarter.

Buchberger got Montague three more touchdowns before halftime – a 44-yard pass to Bryce Stark, a 29-yard run, and a 22-yard pass to Stark. Montague led 35-12 at halftime and didn’t look back.

Caviedes, who also serves as Montague’s placekicker, finished 7-for-7 on extra points.

“(Caviedes) played a big role for us as a freshman last year. He did a great job tonight running the football,” Collins said.

“He’s been a leader for us for years, it seems like we’ve had him forever. He’s a veteran, he’s playing like a veteran and we’re happy to have him,” Collins quipped.