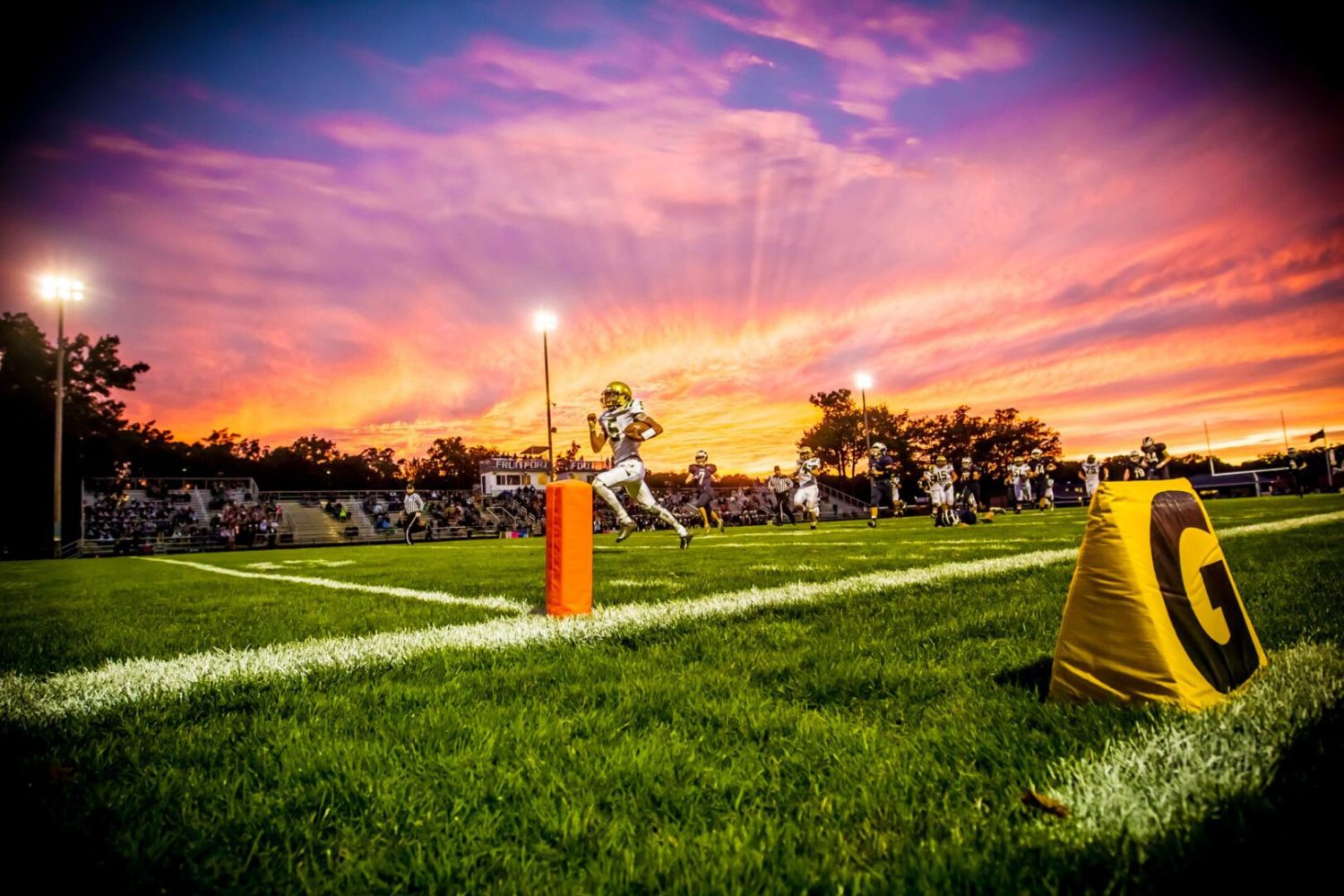 FRUITPORT — Muskegon Catholic trailed Fruitport with 51 seconds remaining on Friday and a league title hanging in the balance.

To make matters worse, they had the ball on their own 34 in a seemingly hopeless fourth-and-nine situation.

So how did the Crusaders respond?

By running a brand new play. And Christian Martinez and Walker Christofferson made sure it turned out to be a brilliant call for the Crusaders.

Martinez found the speedy Christofferson streaking down the middle past the Fruitport secondary and threw him a 34-yard touchdown pass, giving MCC a thrilling 29-26 victory that put the Crusaders into the driver’s seat in the Lakes 8 Conference title race.

“I first saw him running down the middle and the safety was out of the equation,” said Martinez, MCC’s senior quarterback. “I just tossed it up and he caught it. 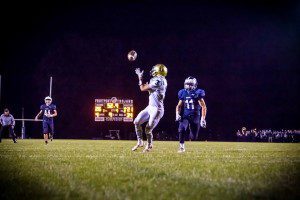 “I saw him catch it and I was just really, really glad. My heart was racing so fast.”

MCC Coach Steve Czerwon said he installed the play on Wednesday, and it was designed for the Crusaders’ slot receivers to go deep. The Crusaders ran it once in the first half, but Martinez badly overthrew Christofferson.

“It’s a play we ran when I played at Saginaw Valley (State),” Czerwon said. “It’s called ‘Vince.’ It’s just designed for players to get vertical.”

The dramatic touchdown was flattening for Fruitport, which controlled the line of scrimmage on both sides of the ball for much of the game. MCC’s potent run game produced 158 yards, but the Crusaders couldn’t dictate the action with the type of big plays they are used to.

The Trojans seemed to be on their way to a major upset,  grabbing a 26-14 lead early in the third quarter on senior quarterback Jarod Wierengo’s 22-yard keeper up the middle. Wierengo was a force running out of the shotgun throughout the contest, totaling 196 yards on 19 carries. 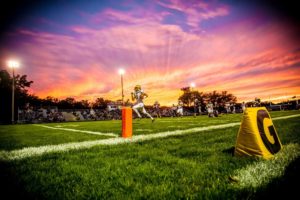 MCC #5 Christian Martinez puts MCC on the board under an impressive sunset in Fruitport. Photo/Tim Reilly

MCC cut into the deficit with 9:02 remaining in the fourth, with Martinez displaying his magic in the pocket.

On fourth-and-two from the two, Martinez scrambled to his right but kept his eyes up the field. He caught a glimpse of tight end Savion Thompson floating alone near the back of the end zone and tossed a dart to make it a 26-21 score.

The Crusaders’ game-winning drive began with 3:20 to play and was aided by a Fruitport late-hit penalty. MCC’s chances looked bleak when it faced fourth down, but Christofferson had enough spring in his step to make the catch and score the game-winner, despite battling painful cramps in his calves throughout the second half.

“This was Walker’s first game back since Oakridge, so obviously it was really nice to have him back in there,” Czerwon said. “He had a hip issue, but he’s healthy now.”

Fruitport surged to a 13-0 lead after one quarter. Wierengo scored on a 51-yard scamper on the Trojans’ opening drive, and junior Levi Six added a five-yard touchdown run.

MCC rallied quickly, with Martinez scoring  on a 46-yard keeper on the Crusaders’ opening series in the second quarter. 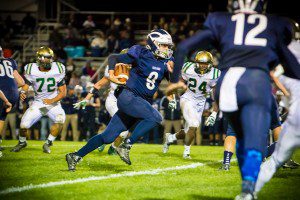 Fruitport QB Jarod Wierengo breaks free up the middle off the keeper for the TD. Photo/Tim Reilly

The Crusaders took their first lead about 20 seconds later, following a Fruitport fumble. Christofferson juked his way to a tremendous 21-yard touchdown on a bubble screen, a play that Fruitport appeared to have bottled up.

Martinez, who completed 7-of-18 passes for 110 yards, said the Crusaders definitely dodged a bullet against an inspired Trojans squad that was looking to avenge last season’s 56-7 blowout.

“We needed a test like this,” Martinez said. “We had our ups and downs with penalties and turnovers but we fought through it. We showed a lot of character by not giving up.”