MUSKEGON – How does a hockey team have 41 more shots than its opponent and still lose the game?

The Muskegon Lumberjacks proved it could be done on Saturday, dropping a 6-3 decision to the Team USA Under 17 squad in their home opener at L.C. Walker Arena, despite outshooting the visitors by an incredible margin of 59-18. 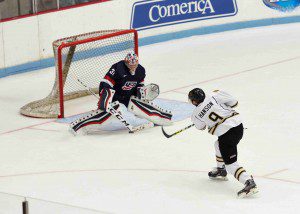 The silver lining is that Muskegon fell behind by four goals in the first period and still fought back and cut its deficit to one in the third period, which helped entertain the crowd of 2,831.

The Lumberjacks fell to 1-1 on the season. They return to action next Saturday at home against Madison.

“The fact of the matter is that our defensemen was terrible,” said Muskegon Coach Todd Krygier. “We didn’t get involved defensively. It’s absolutely unacceptable.

“The fact is that we didn’t play the way we practiced this week and now we’re going to pay the price.”

The shot differential was particularly blatant in the first and second periods, when the Jacks outshot the visitors 40-10.

But they couldn’t get much past USA goalie Adam Scheel, who stopped an amazing 56 shots in a game that he will probably tell his grandchildren about. 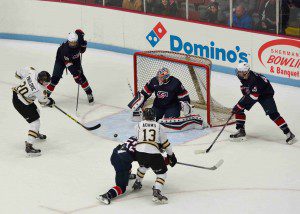 Muskegon, meanwhile, experienced goalie headaches. Starter Joey Daccord, who was named the league’s goaltender of the week for his performance in a victory last Saturday, was pulled from the net after giving up three goals in the first 7:49 of the game.

Backup goalie Devin Cooley played the rest of the game.

“(Scheel) made some great saves, some timely saves, but at the same time we hung our goaltenders out to dry,” Krygier said. “(Daccord) is part of the team and has to accept some responsibility, but at the same time they get a breakaway goal on their first shot of the night. Three goals on five shots. It was just stupid.”

Muskegon outshot Team USA with 18-8 in the first period, but still found itself down 4-0 at the intermission.

Team USA drew first blood at the 4:11 mark as Joey Cassetti broke in alone and beat Daccord to make the score 1-0. 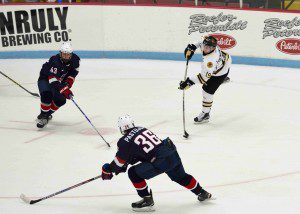 Muskegon fans were disappointed when an apparent goal was waved off with 30 seconds left in the period, because a Lumberjack player knocked the puck in with his hand.

A few seconds later a Lumberjack shot hit the post, adding to the home team frustration.

The Jacks had an incredible 22-2 shot advantage in the second period, and used it to chip away at its deficit.

The Jacks pulled within one goal at 5:38 of the third period on a power play goal Collin Adams.