Nate Jones gets two early pick-sixes, sending MCC on its way to a 49-7 victory over Mt. Pleasant Sacred Heart

Jones tied a state record with two interceptions returned for touchdowns in the game’s first 2½ minutes and the two-time defending state champion Crusaders cruised to a 49-7 victory over the Irish.

The victory moves Muskegon Catholic into the second round, where it will take on Beal City, a 37-0 winner over Vestaburg on the other side of the district bracket. That game is set for 1 p.m. Saturday at Beal City.

On the third play from scrimmage, Irish quarterback Tony Perez attempted a pass that Jones wrestled away from the receiver and dashed into the end zone. On the ensuing possession, Jones stepped in front of another Perez pass and darted 33 yards. Before the MCC offense touched the ball, it was 14-0.

“We played well as a defense,” Jones said. “Guys were getting off blocks and making it tough for (Perez)  to make throws.”

“I’ve seen a lot of football and the kids were saying they hadn’t even seen that before on a video game,” MCC coach Steve Czerwon said of the two picks by Jones. “You know you did something special when they make that statement.” 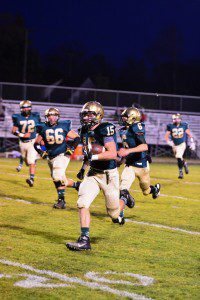 Nate Jones rumbles his way to the MCC end zone after mkaing the second of his pick-sixes. Photo/Michael Banka

From there, the Crusaders (7-2) cruised to their 11th straight playoff victory dating back to the 2013 postseason.

Before the first quarter was in the books, MCC also received a 14-yard touchdown run from quarterback Christian Martinez and a 33-yard touchdown pass from Martinez to explosive back Walker Christoffersen. That made it 28-0.

Christofferson caught a 39-yard touchdown pass from Martinez midway through the second quarter and LaTommy Scott rushed 36 yards for a TD with 2:57 remaining before halftime.

Caleb Muskovin kicked his fifth straight extra point and the Crusaders led 42-0 at the half.

In the second half, with a running clock in place, the team exchanged touchdowns.

Irish running back Kyle Szymanski rushed 15 yards for a touchdown, but on the ensuing kickoff, Scott ran it back 92 yards for a matching touchdown.

Other top defensive plays for MCC included an interception by Mason Convertini in the second quarter and a blocked punt by Brody Kieft late in the third quarter.

“It’s huge to jump out on your opponent and you’re up and on them,” said Jones. “You’re putting pressure on them and you make them come out and respond.”

For Czerwon, it was a great start that got his team rolling.

“It was definitely a nice way to start the game,” Czerwon said. “Our No. 1 goal is to win next week and we put ourselves in a position where we have a chance to do that.”

Sacred Heart (6-4) came into the game with a six-game winning streak.