EGELSTON TOWNSHIP – The Oakridge football team could have made the mistake of looking past Mason County Central on Friday, one week before its showdown with Montague.

But the Eagles stayed focus and attended to business, pounding the visiting Spartans 60-14 in West Michigan Conference football action on Friday.

Oakridge, now 6-1 overall and 5-0 in league play, locked up a playoff spot with the victory. The Eagles will visit undefeated Montague next week with the league title on the line.

The Eagles came into the game knowing they would be without Coach Cary Harger, who missed most of the game for .personal reasons.

Harger arrived halfway through the fourth quarter and realized that his team had the game well in hand.

The Eagle defense played a big role in the romp, picking off six passes and returning three of them for touchdowns.

Assistant coaches Tim Parker and Nate Danicek filled in for Harger and were pleased with the team’s effort.

“It was known for a while that he wasn’t going to be here so we prepared ourselves,” Parker said. “The kids adjusted well and played inspired football.”

“In our conference we need to play like it’s a playoff game, and if you don’t any team can get you,” Danicek added. 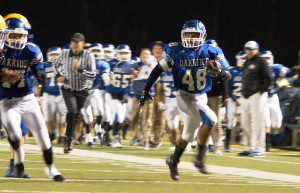 Alex Hutfilz gets the Eagles’ fifth interception of the game and returns it for a TD. Photo/Sherry Wahr

Mason County Central dropped to 4-3 and must win its final two games to become playoff eligible.

James Cooper III opened the scoring with a four-yard touchdown reception from quarterback Brady Luttrull to give Oakridge a 6-0 lead.

The Eagles closed out the first quarter with two touchdowns twenty seconds apart –  a 22-yard toss from Luttrull to Jaegar Beattie  and a 50-yard interception return by Kolin Chahorski.

The Eagles failed on both two-point conversions but led 18-0 after the first quarter.

Oakridge add two more touchdowns through the air in the second quarter, a 34-yard  pass from Chahorski to Cooper and a 15-yard pass from Luttrull to Hunter Drummond..

The Spartans responded with 44-yard touchdown catch by Travis Tyndall from quarterback Spencer Knizacky with 4:25 left in the second quarter to cut their deficit to 32-7.

The Eagles closed out the first half with a 30-yard interception return by Nate Wahr with 1:11 remaining to take a 39-7 halftime lead.

Alex Hutfilz scored two Oakridge touchdowns in the third quarter. on a one-yard run and a 47-yard interception return. 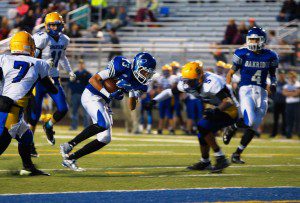 Beattie added a score on a 12-yard reception from Luttrull with 4:24 left in the third to give the Eagles a 60-7 lead.

Mason County Central had the lone fourth quarter score with 3:30 left on an 18-yard catch from Knizacky to wideout Ryan Mount.

Luttrull went 16-for-27 passing for 220 yards and four touchdowns.

Cooper led the Eagles with five catches for 98 yards and two touchdowns while Beattie caught four passes for 61 yards and two scores.

“They are a great team ,” MCC Coach Scott Briggs said about Oakridge. “On our side of it we did not play very well, it was probably the worst game we put together.”