RAVENNA — In a season that’s been constantly torpedoed by painful injuries, David Thompson has played a huge role in keeping the Ravenna football team afloat.

And he’s done it by successfully switching from wide receiver to the more demanding running back position.

“He’s done pretty well,” said Ravenna Coach David Smith, a former standout running back and linebacker for the Bulldogs. “His athletic ability is what stands out. We have high expectations for what he can accomplish here, but he’s just started to do the work. He’s got a long ways to go to become the back he’s truly capable of being.”

Through six games, Thompson, a 5-foot-11, 185-pound junior, has amassed 799 yards on the ground with 11 rushing touchdowns. His receiving skills haven’t diminished, either, as he’s totaled 13 receptions for 278 yards and four more touchdowns. 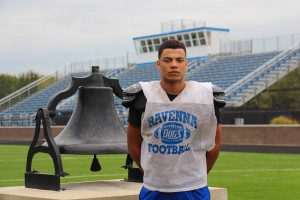 “It’s learning how to condition yourself,” he said. “That’s the biggest thing. At wide receiver, he might catch the ball six, seven times, but when you’re at running back, you’re touching it 20 or more times a game and sometimes four or five times in a row. Your body takes more of a pounding. It’s more of a mental thing adjusting to that.”

Thompson has embraced the move to running back, where he’s been able to help his team a lot more.

“There’s times when I miss being at receiver, but running the ball, you get a chance to contribute a lot more and I’m all about helping my team win,” Thompson said. “Still, there’s been times I’ve taken some shots to the ribs and I’ve just wanted to lay there. But I’m not going to let that happen. I’m getting back up after every hit.”

But even Thompson’s outstanding performance at running back hasn’t been enough to keep Ravenna on track to meet its lofty goals this season.

The talented Bulldogs are only 3-3 heading into Friday’s West Michigan Conference showdown with Whitehall. The Vikings are another good team that’s underperforming at 3-3, so the loser of the contest will probably be eliminated from the postseason.

Ravenna and Whitehall both made the playoffs last year.

The biggest nightmare for the Bulldogs has been injuries to key players. including sophomore running back/defensive back Cameron Passenier, wideout/defensive back Dakota Hudson, linebacker/guard Tanner McFarren, lineman Shane Goebel and defensive back Seth Morgan.

“Injuries have been killing us,” Thompson said. “But aside from Detroit Loyola, which is just a really, really good team, we’ve been in every game. We’ve just shot ourselves in the foot too many times. As coach has told us, our biggest opponent will always be Ravenna.”

“It’s been kind of a perfect storm,” added Smith. “Of our three losses, they’ve come against the defending Division 7 state champion (Detroit Loyola), Oakridge, which is pretty highly ranked, and Montague, who is undefeated. Plus, we’ve had 4-5 kids out nearly every game. There’s not many D-1 schools that can replace that many starters, let alone a small Class C school.”

All of the misfortune has made Thompson’s skill set more important as Ravenna goes into survival mode.

Thompson said he began playing football in kindergarten, and developed a passion for the sport by watching former Ravenna standout Javon Martin star at tailback.

They’re not related, but Thompson calls Martin “an older brother.”

“He wore No. 2 just like me and he inspired me from watching him play,” Thompson said. “I fell in love with Ravenna football because of him.”

With Ravenna starting to get healthy, Smith said the Bulldogs can be dangerous in the closing weeks of the regular season – and perhaps the playoffs – if they can win their last three games.

It’s won’t be easy. Besides Whitehall on Friday, the Bulldogs are scheduled to play a tough Mason County Central next week and defending state champion Muskegon Catholic in Week 9.

“I don’t think many teams would want to play us when we’re at full strength,” Thompson said.

When asked how he wants to close out his final two years at Ravenna, Thompson quickly mentioned getting a ring.

It could be this year, or maybe next, but that mean he wants a state title before he exits and heads off to college.

“That’s what every high school football player should want to play for,” he said. “That’s what I want.”